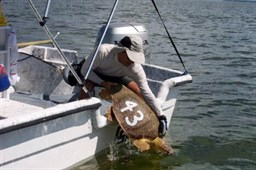 The Fish and Wildlife Research Institute (FWRI) coordinated an index system of sea turtle nesting beach surveys since 1989. This allows for consistent monitoring of trends in the numbers of sea turtle nests. Because sea turtles spend nearly their entire lives in the water, monitoring nesting beaches only provides data on adult female loggerheads, leatherbacks, and green turtles. Nesting beach monitoring does not provide any data on adult males, subadults (or turtles that are not quite adult age), juveniles, or the other two species of sea turtles found in Florida: Kemp's ridleys and hawksbills. These two species use the state's coastal areas as foraging grounds and migratory corridors but only rarely nest on the state's beaches.

The first step in developing such a program involves determining what research is actually taking place. Researchers in FWRI's marine turtle program inventoried all in-water sea turtle research conducted in Florida. Through the use of interviews, questionnaires, and literature reviews, researchers compiled a comprehensive database containing detailed information on 42 research projects (25 active, 17 inactive) focusing on in-water aggregations, or gatherings, of sea turtles. Geographic Information Systems (GIS) maps were also developed for each project that will serve as examples for in-water researchers of how GIS can be used to enhance their studies.

The majority of in-water projects (21) are, or were, located along the southeast coast of Florida, leaving major gaps in information on the northeast coast, west coast, and Panhandle aggregations of sea turtles. The latter two gaps are especially important as the west coast of the state may represent one of the most important foraging grounds for Kemp's ridleys in the United States.

Based on the compiled information, candidate projects were identified for inclusion in a statewide in-water population evaluation program that would provide trend and abundance information on sea turtles in Florida's waters. Recommendations were presented on how to develop such a program, which would include the measurement of capture effort, promotion of cooperation among in-water research groups, and standardization of data collection methods resulting in a consistent set of measurements.

In addition to dedicated in-water studies, other projects and activities were identified that involve the collection of sea turtle data, often secondary to the primary purpose. These projects provide important data on general turtle distributions and can identify target areas for future in-depth studies. Many of these projects are conducted by other sections of FWRI, including capture efforts and aerial surveys for manatees or fish. Other data come from incidental capture in fisheries research projects, or by the fisheries themselves. Pre-dredge trawling, sea turtle aerial surveys, stranding networks, and satellite tracking of sea turtles also provide important distributional data.

The end result of this project is a narrative document that provides an overview of historical and current in-water research in Florida. The document also serves to guide future research. The initial document, released in 2006, was updated with an additional year of data and published as a National Marine Fisheries Service Technical Memorandum (NMFS-OPR-38) in June 2008.