Funded in part by the  National Fish and Wildlife Foundation

The Importance of Florida Bay 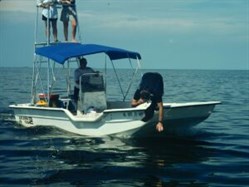 Florida Bay is an important sea turtle habitat located between the southern tip of the Florida peninsula and the Florida Keys.

Every summer, a team of researchers captures sea turtles that live in Florida Bay to learn more about them. The information gathered by this study allows the researchers to determine long-term trends in sea turtle abundance and to monitor and investigate any changes in the sea turtle populations.

Some of the questions researchers are attempting to answer include the following: 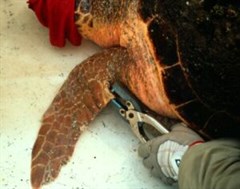 About 75-100 live loggerheads are captured in southwestern Florida Bay over a 10-day sampling period in early summer each year.

Researchers go out on two flat-bottomed vessels, traveling at a slow speed in a random search pattern until a turtle is spotted. Snorkelers then dive near the turtles and capture them by hand.

Search paths and coordinates of the capture site are taken using a Global Positioning System (GPS) unit. Environmental data are noted, including water depth and a description of the sea bottom. The turtle is brought on board and measured, weighed, examined externally and photographed. Any signs of injuries or disease are documented.

Turtles are tagged with Inconel metal tags along the rear edge of both front flippers. Passive integrated transponder (PIT) tags are also placed into the right front flipper using a sterile hypodermic needle. The PIT tag is a tiny microprocessor capable of transmitting a unique identification code when excited by a detector.

Before releasing the turtle, a number is painted on the carapace to make sure the same one is not recaptured during the sampling period. The paint is not permanent - it fades after a few weeks.