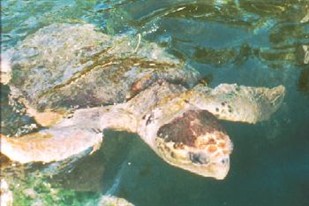 The most common sea turtle in Florida, the loggerhead is named for its massive, block-like head. Loggerheads are among the larger sea turtles; adults weigh an average of 275 pounds and have a shell length of about 3 feet. Its carapace, which is a ruddy brown on top and creamy yellow underneath, is very broad near the front of the turtle and tapers toward the rear. Each of its flippers has two claws. As is true for all sea turtles, the adult male has a long tail, whereas the female's tail is short; however, a juvenile's cannot be determined externally.

The powerful jaws of the loggerhead allow it to easily crush the clams, crabs, and other armored animals it eats. A slow swimmer compared to other sea turtles, the loggerhead occasionally falls prey to sharks, and individuals missing flippers or chunks of their shell are not an uncommon sight. However, the loggerhead compensates for its lack of speed with stamina; for example, a loggerhead that had been tagged at Melbourne Beach was captured off the coast of Cuba 11 days later. 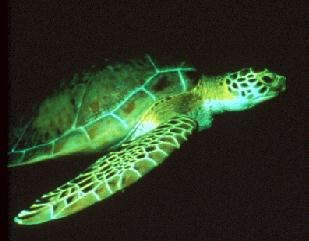 Green turtles, named for their green body fat, were valued by European settlers in the New World for their meat, hide, eggs, and "calipee" (the fat attached to the lower shell that formed the basis of the popular green turtle soup). Merchants learned that the turtles could be kept alive by turning them on their backs in a shaded area. This discovery made it possible to ship fresh turtles to overseas markets. By 1878, 15,000 green turtles a year were shipped from Florida and the Caribbean to England. At one time, Key West was a major processing center for the trade. The turtles were kept in water-filled pens known as "kraals," or corrals. These corrals now serve a more benign role as a tourist attraction.

A more streamlined-looking turtle than the bulky loggerhead, the green turtle weighs an average of 350 pounds and has a small head for its body size. Its oval-shaped upper shell averages 3.3 feet in length and is olive-brown with darker streaks running through it; its lower shell, or plastron, is yellow.

Green turtles are found during the day in shallow flats and seagrass meadows and return every evening to their usual sleeping quarters-scattered rock ledges, oyster bars, and coral reefs. Adult green turtles are unique among sea turtles in that they are largely vegetarians, consuming primarily seagrasses and algae. Approximately 100 to 1,000 green turtles nest on Florida's beaches each year from June through late September. 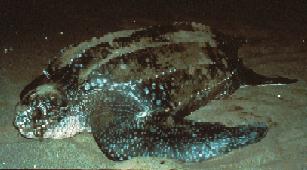 The leatherback is a fascinating and unique animal, even among sea turtles. It is larger, dives deeper, travels farther, and tolerates colder waters than any other sea turtle. Most leatherbacks average 6 feet in length and weigh from 500 to 1,500 pounds, but the largest leatherback on record was nearly 10 feet long and weighed more than 2,000 pounds.

Leatherbacks look distinctively different from other sea turtles. Instead of a shell covered with scales or shields, leatherbacks are covered with a firm, leathery skin and have seven ridges running lengthwise down their backs. They are usually black with white, pink, and blue splotches and have no claws on their flippers. Leatherbacks eat soft-bodied animals such as jellyfish, and their throat cavity and scissor-like jaws are lined with stiff spines that aid in swallowing this soft and slippery prey. Young leatherbacks in captivity can consume twice their weight in jellyfish daily.

True denizens of the deep, leatherbacks are capable of descending more than 3,000 feet and of traveling more than 3,000 miles from their nesting beach. They are found throughout the Atlantic, Pacific, and Indian oceans, as far north as Alaska and Labrador. Researchers have found that leatherbacks are able to regulate their body temperature so that they can survive in cold waters. The leatherback is found in Florida's coastal waters, and a small number (from 30 to 60 a year) nest in the state.

The Kemp's ridley is the rarest sea turtle in the world and is the most endangered. It has only one major nesting beach, an area called Rancho Nuevo on the Gulf coast of Mexico. The location of this nesting beach was itself a mystery to scientists until the discovery of a film made in 1947 by a Mexican engineer showing 40,000 Kemp's ridleys crawling ashore in broad daylight to lay eggs. Sadly, an "arribada" (from the Spanish word for arrival) of such awe-inspiring splendor can now be seen only on film. Fewer than 1,000 nesting females remain in the world.

Kemp's ridleys are small, weighing only 85 to 100 pounds and measuring 2 to 2.5 feet in carapace length, but they are tough and tenacious. Their principal diet is crabs and other crustaceans.

During the 1980s, many eggs were removed from the beach at Rancho Nuevo and incubated in containers. The hatchlings that emerged from these eggs were then raised for almost a year in a National Marine Fisheries Service facility in Galveston, Texas. Upon release, it was hoped that these "headstarted" turtles had a better chance of survival than they would have had as hatchlings. Unfortunately, there were many problems with this program. When it was discovered that the sex of turtle hatchlings was influenced by temperature, project workers realized that the artificial egg incubators were producing only male turtles. They also discovered that many of the "headstarted" turtles did not behave like their wild counterparts after release. Many scientists worried that these "headstarted" turtles would never become reproducing adults. Although two "headstarted" turtles have finally been known to nest, headstarting is generally considered to be an inappropriate conservation technique for marine turtles. 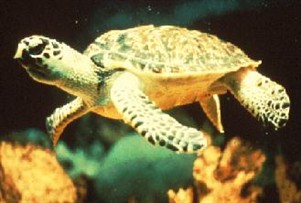 The hawksbill is a small, agile turtle whose beautiful tortoise-colored shell is its greatest liability. The shell is still used in some European and Asian countries to make jewelry, hair decorations and other ornaments, even though international trade in hawksbill products has been banned in much of the world.

Hawksbills weigh from 100 to 200 pounds as adults and are approximately 30 inches in shell length. Its carapace is shaded with black and brown markings on a background of amber. The shields of this kaleidoscopic armor overlap, and the rear of the carapace is serrated. Its body is oval-shaped, its head is narrow, and its raptor-like jaws give the hawksbill its name. These jaws are perfectly adapted for collecting its preferred food, sponges. Although sponges are composed of tiny glasslike needles, this potentially dangerous diet apparently causes the turtle no harm.

Hawksbills are the most tropical of the sea turtles and are usually found in lagoons, reefs, bays, and estuaries of the Atlantic, Pacific, and Indian oceans. They are frequently spotted by divers off the Florida Keys, and a few nests are documented annually from the Keys to Canaveral National Seashore.