The History and Life of a Sea Turtle 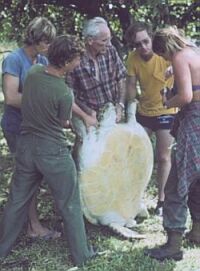 Sea turtles are among the oldest creatures on earth and have remained essentially unchanged for 110 million years. However, they face an uncertain future. Sea turtles are threatened in many ways, such as encroachment of coastal development on their nesting beaches, encounters with pollutants and marine debris, accidental drownings in fishing gear, and international trade in turtle meat and products.

Information about these ancient nomads of the deep has until recently focused on nesting females and hatchlings because they are the easiest to find and study. The advent of new research techniques, such as satellite tracking technology, has allowed scientists to peer into other phases of their lives. Florida, a leader in sea turtle research and conservation, is home to the nation's only refuge designated specifically for sea turtles. On Florida's east coast, the Archie Carr National Wildlife Refuge, named after the pioneering researcher (pictured to the right) whose work first called attention to the plight of the sea turtles, serves as a nursery for approximately one-quarter of all loggerhead turtle nests in the Western Hemisphere. 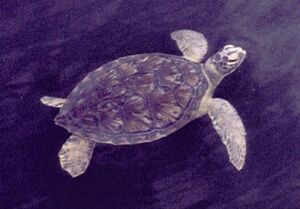 Sea turtles are air-breathing reptiles remarkably suited to life in the sea. Their hydrodynamic shape, large size, and powerful front flippers allow them to dive to great depths and swim long distances. After their first frantic crawl from the nest to the ocean, male sea turtles never return to the shore again, and females come back only long enough to lay eggs.

There are seven species of sea turtle: green turtle, hawksbill, leatherback, loggerhead, olive ridley, Kemp's ridley, and flatback. All but the olive ridley and flatback are found in Florida. Sea turtles have long and narrow wing-like flippers in place of forelimbs and have shorter webbed flippers as hind limbs; unlike their terrestrial relatives, they cannot retract their heads very far into their shells.

The smallest of the sea turtles are the ridleys, weighing in at 85 to 100 pounds as adults. Leatherbacks are the behemoths and can grow to 2,000 pounds. Most sea turtles grow slowly and have a life-span of many decades. Although sea turtles can remain submerged for hours at a time while resting or sleeping, they typically surface several times each hour to breathe.

In summer, an ancient reproductive ritual begins when the female leaves the sea and crawls ashore to dig a nest in the sand. She uses her rear flippers to dig the nest hole and then she deposits about 100 eggs the size of ping-pong balls.

Fast Fact: Female sea turtles often appear to be weeping as they nest; the main purpose for these tears is to remove any salt from the turle's body.

When egg-laying is complete, the turtle covers the eggs, camouflages the nest site, and returns to the ocean. Nesting turtles may return several times in a nesting season to repeat the process and usually nest every two to three years.

As is true for some other reptiles, the temperature of the sea turtle nest determines the sex of the hatchlings. Warmer temperatures produce more females, whereas cooler temperatures result in more males. Consequently, conservationists prefer to leave turtle eggs in their original location whenever possible so that sex ratios are determined naturally.

Fast Fact: The contiguous beaches of Brevard, Indian River, St. Lucie, Martin, and Palm Beach counties are the most important loggerhead nursery areas in the Western Hemisphere, attracting more than 15,000 female loggerheads each May through August.

After incubating for about two months, the eggs begin to hatch. A few days later, 2-inch hatchlings emerge as a group. This mass exodus usually occurs at night, and the hatchlings use the bright, open view of the night sky over the water to find their way to the sea. Artificial lights on beachfront buildings and roadways distract hatchlings on their way to the ocean. Because of this danger, many beachfront communities in Florida have adopted lighting ordinances requiring lights to be shut off or shielded during the nesting and hatching season.