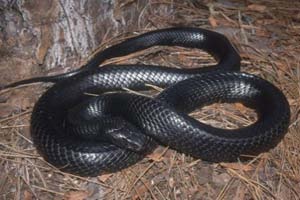 The eastern indigo snake (Drymarchon couperi) is a federally threatened species that historically occurred in southeastern Mississippi, southern Alabama, southern Georgia and throughout Florida. Despite its protected status, very little is known about indigo snake population trends in Florida or elsewhere in its range. This information is necessary to detect locations where populations have declined, determine potential causes for declines and identify areas that require special management for this species.

In 2008, FWRI researchers began compiling historical and recent sightings of indigo snakes to determine its status in Florida. Researchers also developed a potential habitat map using land cover classes (locations of different habitat types), soils and habitat patch size. This information was provided to the U.S. Fish and Wildlife Service and other interested parties to help determine whether the species is present on sites slated for commercial or residential development.

The FWC is collaborating with The Orianne Society, a privately funded organization working to conserve indigo snakes, and the Georgia Department of Natural Resources to publish a paper on the current and historical distribution of the species throughout its range. As of 2012, researchers had compiled 1,397 individual Florida records, 41 percent of which were recent observations (2001-2012) of indigo snakes. From 2001-2012, indigo snakes were observed in 49 of Florida’s 67 counties and on 100 conservation lands greater than 2,500 acres (1,000 hectares).