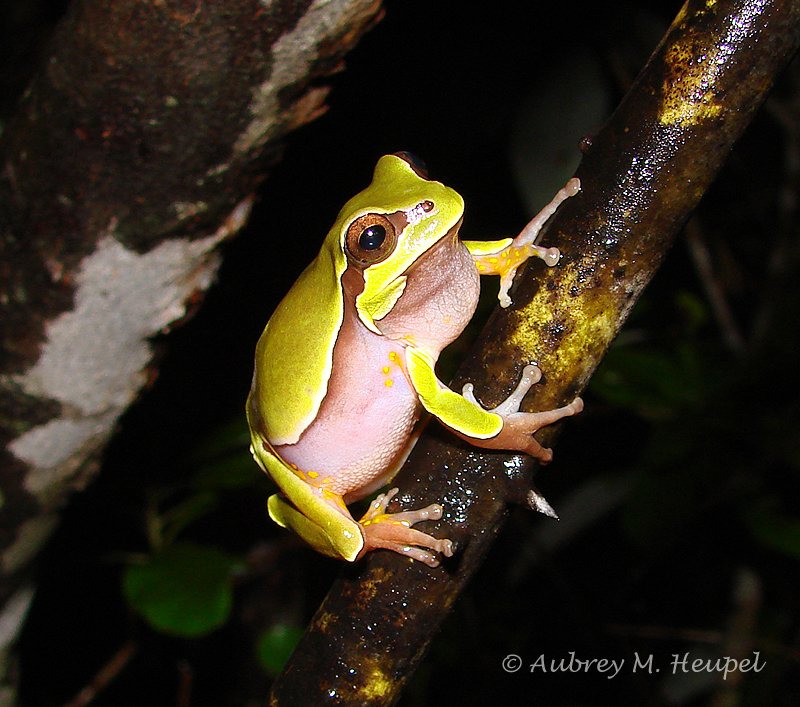 The Pine Barrens treefrog (Hyla andersonii) is listed as a Species of Special Concern in Florida. Based on a biological status review, the Florida population was recommended for delisting; however, the species’ present distribution and the condition of its habitat needed to be assessed to support the development of an effective management plan.

FWRI researchers conducted roadside call surveys at 111 historical Hyla andersonii (Pine Barrens Treefrog) sites in 2013–2016. The speces was detected at 49 sites (44%), which is consistent with surveys conducted in the early 1980s. The species was deteceted throughout its historical range except Holmes County, which only has 4 historical sites. Researchers also identified 33 new sites on public lands and 4 new sites on private lands. Multi-season occupancy models were used to determine the influence of site and survey covariates on species occupancy and detection rates in Blackwater River State Forest. Species detection was positively associated with air temperature and partial cloud-cover and negatively associated with clear skies. Pine Barrens Treefrog occupancy rates were lower at survey sites surrounded by hardwood-dominated wetlands, suggesting that hardwood encroachment has negatively impacted this species on some areas of Blackwater River State Forest. FWRI researchers recommend that future call surveys include a minimum of 5 visits to each survey site before inferring species absence. These surveys suggest that the status and distribution of the species remain stable despite some habitat degradation.

Request access to the publication of this research from the Digital Library.