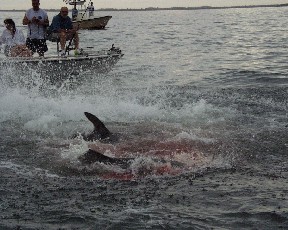 Fishing for tarpon is always exciting, but on June 16, 2003, researchers from the Florida Fish and Wildlife Conservation Commission's (FWC) Fish and Wildlife Research Institute (FWRI) witnessed a particularly amazing, and most likely , once-in-a-lifetime event.

For roughly eight weeks, FWRI biologists had been riding with charter boat captains in Boca Grande Pass. As part of a Catch-and-Release Mortality Study, the captains and their clients allowed the FWRI scientists to place a sonic tag on the first tarpon landed on their boats. Anglers from around the world know that Boca Grande Pass is a great place to land tarpon. During the peak of the tarpon season, as many as 100 boats at a time can crowd the pass. Sharks, major predators on tarpon, also know that Boca Grande Pass is a good place to hunt the fish.

The morning of June 16 was chaotic. Tarpon were biting everywhere. Anglers all over the pass were yelling, "Fish on," as tarpon hit their lines. FWRI researchers were watching a 20-ft flats boat. At the center console, the captain expertly maneuvered the boat in the pass to allow his client in the fighting chair to land a tarpon. The angler hooked a tarpon, and the biologists watched as the silver king burst from the water into midair, clearing the water and the bow of the boat by as much as three feet! The angler, reeling furiously to land his prize, barely noticed that a 9-ft bull shark had followed the massive tarpon out of the water. The shark also flew through the air, clearing the boat by at least two feet.

In the ensuing seconds, the tarpon plunged into the water on the other side of the boat, but the shark came up short, landing on the boat instead of in the water! For one breathless moment, the shark lay curled in a half circle, its head resting on the platform near the angler's chair and its tail against the captain's console. Onlookers gasped as the shark flashed a toothy grin and bounced itself over the side of the boat and back into the water. Fortunately, no one was hurt, and nothing was broken. Everyone aboard the flats boat was understandably shaken, and all of the stunned onlookers took home an amazing fish tale.