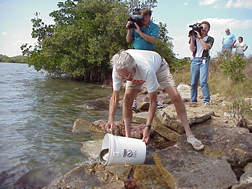 With the agreement of our newly formed Marine Stock Enhancement Advisory Board, FWC discontinued releases in Biscayne Bay and began a new project in Tampa Bay. The first release of red drum for Project Tampa Bay is planned for March 2000. In the mean time, red drum originally destined for Biscayne Bay were diverted to the Indian River Lagoon (IRL). During February 1999, FWC began stocking hatchery-reared red drum at six sites in two geographic locations in the IRL. The sites in the North IRL include Thousand Islands, Mullet Creek, and Long Point Park. The sites in the vicinity of the St. Lucie River include Blind Creek, Herman's Bay, and Five Fingers (in the North Fork of the St. Lucie River).

The majority of the fish were caught by anglers and reported to FWC via our Angler Tag Return Hotline (1-800-367-4461). FWC Fisheries Independent Monitoring teams (field biologists sampling with nets from boats) also captured a small number of fish. For marine stock enhancement, a capture rate of 2 to 3 percent is considered very successful, and above 3 percent is exceptional. These capture percentages indicate that hatchery red drum stocked into the Indian River Lagoon are able to survive and adapt to wild conditions. The mean total length of the fish stocked was 13.3 inches and the mean weight was 0.82 pounds.

All red drum released from February through September 1999 were marked with an internal anchor tag (IAT). These tags are anchored through the belly-wall with a base-plate and have an externally visible streamer. Both the baseplate and streamer have fish identification and reporting information on them. Fish stocked during October and December 1999 were implanted with a dart tag. Dart tags, unlike the IATs, are inserted in dorsal (back) muscle. Dart tags have a "harpoon-like" barb that is pushed into the muscle. This tag does not have an internal base-plate like the IAT, but does have an externally visible streamer with fish identification information on it.

This completes the stocking of East Coast fish produced from spawns during fall 1997. There is an undetermined number of fish produced from spawns during fall 1998 still in ponds at Port Manatee. One of these ponds suffered heavy losses from cormorant predation due to damaged bird-exclusion netting. Surviving fish have been moved to ponds with better netting. These fish will be harvested as soon as possible, tagged and released.