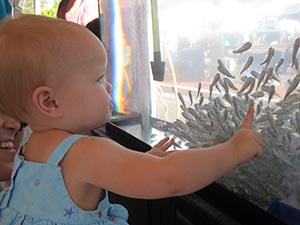 At FWRI’s Stock Enhancement Research exhibit, visitors got to “Guess the Reds” for a chance to win a free 2017 MarineQuest t-shirt or kid’s rod & reel combo. Hatchery scientists stocked a 75-gallon aquarium with hundreds of baby redfish in an effort to educate attendees about the fish rearing process and how stock enhancement plays a role in managing Florida’s fisheries.

The winner of the 2017 "Guess the Reds" contest was Sarah Philp from St. Petersburg, Florida. Ms. Philp guessed that there were 570 juvenile redfish in the aquarium and she won the MarineQuest 2017 t-shirt. The second closest guess was entered by Ladian Ordonez, a young man from Bradenton who guessed 600 redfish and he won the kid’s rod & reel combo and tackle box.

There were exactly 584 redfish in the aquarium. Out of 728 entries, no one guessed the “magic” number, but there were several close guesses.