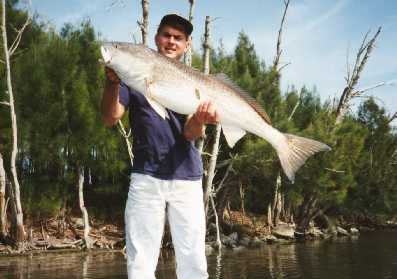 Edibility of the species is considered excellent by many. Reds are primarily fished for in shallow water and are one of the most accessible sport fish to Florida anglers. They may be taken wade fishing, surf fishing, pier fishing, and fishing from a boat.

Because of their popularity as both a sport fish and a food fish, enormous pressure from both the recreational and commercial fisheries caused a decline in redfish populations in the 1980s-'90s. The fish are currently managed by the Florida Fish and Wildlife Conservation Commission (FWC), limiting both the number and size taken. In addition to regulating harvest, the FWC's Fish and Wildlife Research Institute (FWRI) administers the Fisheries Stock Enhancement Program at the Port Manatee facility (known as SERF, for Stock Enhancement Research Facility), breeding and rearing redfish for release into Florida's coastal waters.

How it works
Brood stock, or mating pairs of redfish, are captured in the wild and maintained in large indoor pools to produce fertilized eggs. These large fish can produce several hundred thousand offspring from a single mating. Through artificial changes in their environment, the fish are induced to mate in captivity. By altering the period of time the lights are turned on, simulating daylight periods, and changing the water temperature, conditions are mimicked that trigger breeding. The fertilized eggs are then collected and incubated until they hatch.

The larval fish are then moved to outdoor ponds for growout to the desired size for stocking. The fingerling fish are classified by length as Phase-1 (1.25 inches), Phase-2 (3-4.5 inches) and Phase-3 (6-7 inches). Fish in different phases are released in varying conditions and locations as part of an on-going experiment to determine which combination will be the most efficient. It is generally true that the larger the fish at the time of release, with all other variables being equal, the greater the fishes chance to reach maturity. But the cost of caring for and available resources the larger fingerlings require increases when compared with the smaller fish, so not as many will be released. This research oriented approach separates SERF's efforts from some other hatcheries, and will eventually provide the data necessary to get the most bang for the buck from the program.

Monitoring
After the fish have reached the target phase for release, they are tagged so that they can be identified later as hatchery fish. The small fish will be identified with genetic marks so that biologists can identify them when captured. Larger fish are implanted with coded wire tags that can be detected by field biologists. The largest fish are implanted with visible tags that have a toll-free number so that anglers can report their catch. Other large fish may be implanted with sonic tags so their movements can be precisely tracked.

After the fish are stocked, teams conducting both random and directed sampling will monitor them. Random refers to sampling that does not specifically target the hatchery fish but occurs in or near the stocking location. Directed refers to sampling that specifically targets hatchery fish. The information gathered in these assessments help to determine the best size and best stocking locations for survival.