The Southeast Area Monitoring and Assessment Program (SEAMAP), which began in 1982, is a cooperative state and federal program for collecting, managing, and disseminating fishery-independent data in the southeastern United States. Scientists conducting surveys aboard research vessels collect the data.

Fishery-independent data provide essential information on abundance and distribution of fish, as well as environmental changes, for use by fisheries managers, academic researchers, and fishing industry (commercial and recreational) personnel. SEAMAP is a federally funded partnership in which the participants work toward common goals to obtain and use scientific information about living marine resources.

State and federal fishery management and research agencies share interest in and responsibilities for common fisheries resources, but individually, they often lack the funding to support regional surveys throughout the geographic range of the fish. SEAMAP participants contribute funding, expertise, sampling platforms, and gear to collect data that all can share, making it a cost-effective program.

SEAMAP data sets are particularly useful in fisheries stock assessments because of their quality. SEAMAP cruises have taken place multiple times a year for over three decades, so these data sets also show seasonal differences and any changes that may have occurred over time.

SEAMAP Sampling Grid of the Gulf of Mexico

Examples of fisheries for which resource managers use SEAMAP data to support management decisions include red snapper and shrimp in the Gulf of Mexico; Spanish mackerel, rock shrimp, and weakfish in the South Atlantic; and red hind in the Caribbean. In addition, SEAMAP has conducted special studies, workshops, data management, dissemination of information, and specimen archiving.

Larval sampling data may be used to track commercial and recreational species as well as provide insight to the distribution of invasive species such as lionfish.

A Brief Description of the Ichthyoplankton Collection Holdings

The SEAMAP collection's staff maintain specimens and samples, process specimen requests, and carry out archiving and loans in accordance with approved policies and procedures. The SEAMAP Ichthyoplankton Archiving Center, located at the FWC’s Fish and Wildlife Research Institute in St. Petersburg, houses sorted fish and fish egg samples collected through the program. The specimens represent over 30 years of surveys from throughout U.S. waters of the Gulf of Mexico.

The SEAMAP Archiving Center houses more than 580,000 cataloged lots. Sampling cruises are seasonal, and most of the samples are collected from 61 cm (2 ft) bongo nets and 1 m by 2 m (3.28 ft by 6.56 ft) neuston nets towed to a depth of 200 m (656 ft) or within 2 m of the bottom at shallower stations. Associated hydrographic data are also collected and available.

Addition of Samples to the SEAMAP Ichthyoplankton Catalog 1982-2016 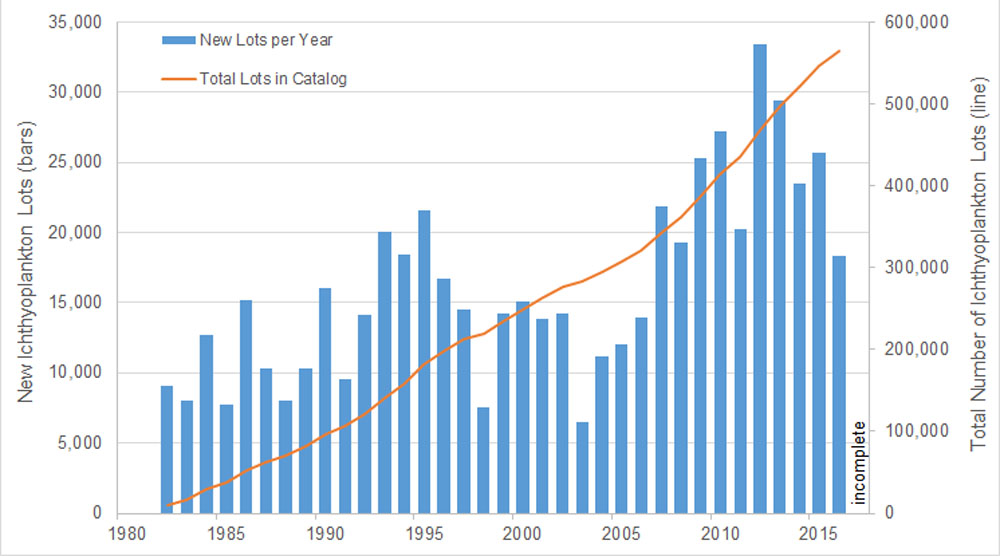 A search engine is not available for the SEAMAP ichthyology collection and these data are not included in the FWRI ichthyology catalog.

A list of SEAMAP cruises can be found on the Gulf States Marine Fisheries Commission webpage.

To request a specimen loan, inquire about specimen availability, or for additional information, contact the SEAMAP Archive Collection Manager:

Read about the SEAMAP Program on the GSMFC page

Read about the SEAMAP Plankton Surveys on the NOAA SEFSC page