A Review of Florida’s Permit Fishery

Permit (Trachinotus falcatus) have long been sought after by commercial and recreational fishers on Florida’s Atlantic and Gulf coasts. Though this species is a prized catch, little is known about the status of the permit fishery. Commercial landings are relatively low; however, recreational landings data are scarce and there is still much to learn about the permit’s basic biology. That’s why Fish and Wildlife Research Institute (FWRI) biologists, in collaboration with Bonefish and Tarpon Trust and Costa Del Mar, are conducting a multi-year study on permit biology, life history and movement patterns.

The study relies on anglers tagging and fin-clipping, which is collecting a tissue sample, permit they catch and release. Biologists can then track movement patterns (e.g., reefs to shore, reef to reef, inshore to offshore, south to north) when anglers recapture and report catches of tagged permit. In addition, FWRI scientists are conducting genetic analysis of fin clips to assess permit population structure and determine whether permit throughout Florida's coastal and inshore waters share a single genetic stock. This valuable data can help Florida’s fishery managers determine the best management methods for permit. To learn more about how anglers can contribute to this research, read the article Tag a Permit for Research Gains.

History of the Fishery

Commercial landings accounted for the majority of the statewide permit landings before the net limitation amendment (Amendment Three to the Florida Constitution) went into effect July 1, 1995, making use of entangling nets (e.g., gill nets, trammel nets) illegal. Since then, the majority of permit has been taken by the recreational sector, which accounted for 82 percent of permit landings from 2001 to 2007 on average.

This chart shows the commercial and recreational permit landings in pounds from 1986 to 2007. 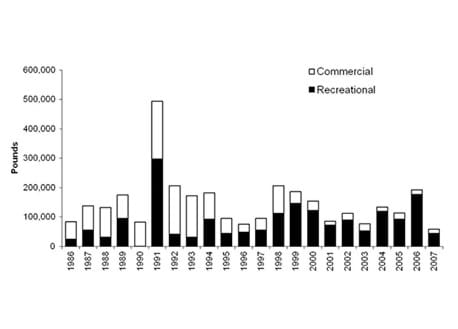 Commercial landings have been declining since 1998, which can be partially attributed to changes in commercial regulations. Fishers target permit in the 1.5- to 3-pound range, which is characteristic of permit of legal harvest size. Most commercial fishers along the Gulf Coast (where most of the landings come from) land less than 500 pounds of permit annually. This equates to approximately 250 fish or less, which is a relatively small number of fish compared to other commercial fisheries. In fact, the monthly average weight of permit landed per trip from 2006 to 2010 was less than 55 pounds for all months but August, when it was 75 pounds.

In 2011, the FWC eliminated all directed commercial harvest of permit in state and federal waters off Florida. Since then, only 100 permit may be kept as bycatch by commercial fishers who hold a saltwater products license and a restricted species license and who are legally fishing for other species with gill or entangling nets in federal waters outside a Special Permit Zone, so landings remain low. The Special Permit Zone, an area in south Florida that includes all state and federal waters south of Cape Florida and south of Cape Sable, was created by the FWC in 2011 to provide additional protection to the species. There is no direct or indirect commercial harvest of permit inside the Special Permit Zone. 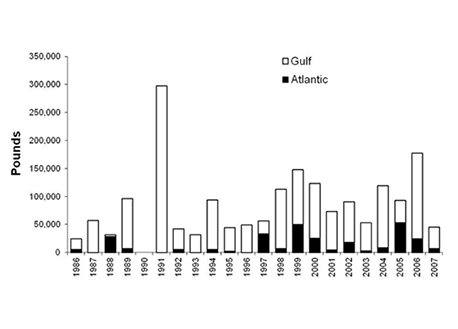 The recreational fishing sector accounts for the majority of statewide permit landings and most are taken along the Gulf Coast. However, recreational permit landings have increased along the Atlantic coast since 1997. The most productive months for recreational permit fishing appear to be March through June with a peak in April, based on estimates using Marine Recreational Fisheries Statistics Survey data (1982-2009). This coincides with the start of permit spawning season. There is a secondary peak in catches from November through January when permit aggregate at warm-water areas such as around power plants, allowing recreational anglers to more easily find them.

Permit are targeted by some anglers for catch-and-release sport fishing, but they are also commonly harvested and eaten. Data from 2004 to 2007 show anglers harvested an average of 59 percent of the recreationally caught permit. Since permit form large schools that will gather by reefs and wrecks for days at a time, they can be easily targeted by spear-fishers and hook-and-line anglers once the schools are located, especially during spawning season. In 2011, the FWC implemented regulations to protect adult permit aggregations found along Florida’s wrecks and reefs from too much fishing pressure. Managers also changed size and bag limits and established a closed harvest from May through July inside the Special Permit Zone. The closed season equates to catch-and-release fishing only during spawning. Both of these changes help to protect both juvenile and adult permit.