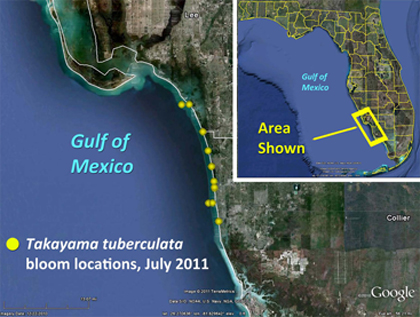 The first Takayama tuberculata blooms of 2011 on the west coast of Florida were observed July 5 at Vanderbilt Beach and Naples Pier in Collier County. Takayama tuberculata is a single-celled organism belonging to a group of microscopic algae called dinoflagellates. Wart-like bubbles on the bottom of the cell make it very distinct from other Takayama species.

On July 18, two weeks after the first observed T. tuberculata blooms, fish kills associated with low dissolved oxygen concentrations were reported at Clam Pass and Vanderbilt Beach. Many aquatic species washed up, dead or dying, onto the county's beaches. Collier County officials warned beachgoers to exercise caution due to the "large number of stressed and dying animals in the surf zone that could cause injury if stepped on." Local residents and county officials were surprised to see the variety of creatures that normally do not appear in the shallows, such as lobsters and nurse sharks, with the patchy T. tuberculata blooms along the shoreline. Routine water sampling at the northern Collier County beaches revealed that nontoxic diatom blooms of Hemiaulus sp., Proboscia alata, and Nitzschia closterium also were present there.

On July 18 and 19, satellite images from the University of South Florida's College of Marine Science showed  elevated chlorophyll levels offshore of Collier County and along its coast, indicating the presence of algal blooms. Water samples revealed bloom concentrations of T. tuberculata at Lover's Key State Park in Lee County on July 20, but no adverse effects from this single bloom appeared to occur.

The following week, the FWC's Fish and Wildlife Research Institute conducted an offshore sampling trip to determine the extent of the blooms. Cruising up to 12 miles offshore of Lee and Collier counties, staff noted cloudy water and high chlorophyll concentrations. At a few locations, microscopic examination of the waters showed blooms of coccolithophorids, microscopic algae that can cause waters to appear cloudy. Offshore water samples indicated very low concentrations of T. tuberculata and patches of nontoxic diatoms, suggesting that the Takayama blooms were confined alongshore.

Microscopic examination of water samples collected at Collier County beaches on August 2 showed that while T. tuberculata blooms were absent, there were blooms of coccolithophorids and nontoxic diatoms at Barefoot Beach, Vanderbilt Beach, and Naples Pier.  By August 9, all previously reported blooms were gone from Collier and Lee counties.

View images and learn more about HAB species in our Flickr set.