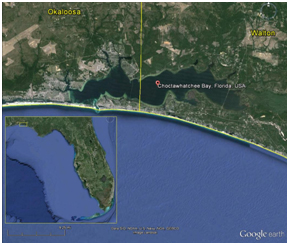 Although no Karenia brevis (Florida red tide) cells were observed  and only background levels of neurotoxic brevetoxins (toxin produced by K. brevis) were present in water samples, FWRI staff found dying fish from the affected areas behaved as if they had been exposed to brevetoxins. In addition, high concentrations of brevetoxins were found in the internal organs of sturgeon, gar and multiple samples of juvenile fish, which indicated toxin exposure. No other HAB species or toxins were identified in connection with the Choctawhatchee Bay aquatic animal mortalities. Although background levels of a potentially toxic diatom (Pseudo-nitzschia sp.) were detected in some samples, no domoic acid (toxin produced by the organism) was present in the samples tested. In addition, contaminant data provided by the Florida Department of Environmental Protection showed that environmental contamination did not play a role in the fish kills. Based on the results, brevetoxin is considered the primary cause of the fish kills. These findings also indicate that a reservoir of brevetoxin from a previous bloom along the Florida Panhandle may have been present in Choctawhatchee Bay. This event exemplifies how effects from red tide can continue long after (weeks to months) a bloom has ended.

FWRI acknowledges the Association for Bayou Conservation, the Choctawhatchee Basin Alliance and the Healthy Gulf Coalition for their collaboration and assistance in collection of samples and provision of data.