Biologists rediscovered a freshwater mussel not seen in 20 years while working in the Ochlockonee River. 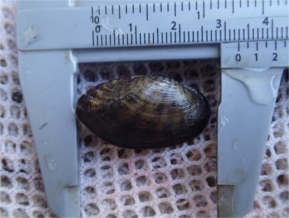 In the summer of 2014, Fish and Wildlife Research Institute (FWRI) biologists conducted a general survey of freshwater mussels in the lower Ochlockonee River and unexpectedly found a live specimen of Ochlockonee Moccasinshell (Medionidus simpsonianus). Believed by many to be extinct, this freshwater mussel was listed as endangered in 1998 and had not been seen since 1995 despite search efforts by the United States Fish and Wildlife Service (USFWS) and the United States Geological Survey (USGS) over the last 20 years. The area in the Ochlockonee where it was found was only the second sighting below the Talquin Dam and expanded the known range of the mussel by more than 50 miles.  Biologists believe that the species may have been rediscovered because of new efforts to sample remote areas of the river and snorkel deeper habitats that may have been overlooked in the past.

In the study, biologists conducted surveys to update species distributions for Florida mussels and to assess locations for future freshwater mussel long-term monitoring sites. The FWRI researchers sampled a total of 32 sites within a 25 mile stretch of the lower Ochlockonee River and found live Ochlockonee Moccasinshells at six of them, totaling 17 live animals.

In the future, biologists will go back to conduct additional surveys in the area as soon as seasonal water levels drop. They have reason to believe that they will find more of this species and may extend the range further. In addition to the Ochlockonee Moccasinshell, there are two additional listed species, Shinyrayed Pocketbook (Hamiota subangulata) and the Oval Pigtoe (Pleurobema pyriforme), which have a similar distribution to that of the Moccasinshell in the Ochlockonee and another species thought to be extinct, the Ochlockonee Arcmussel (Alasmidonta wrightiana), which may still exist in the river. Biologists have yet to locate any of these three species but are optimistic. Finding the Ochlockonee Moccasinshell here gives them hope that these other species may also be present in the area.