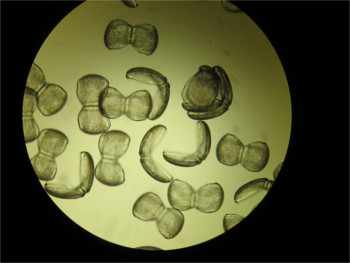 Freshwater mussels begin life as parasitic larvae known as glochidia. When these larval mussels are expelled by their mother, they must find a suitable host fish to develop. They attach themselves to the fish’s gills. This doesn’t hurt the fish; in fact, it wouldn’t do the parasitic mussel any good if it killed the host. After several weeks, the larvae transform into juvenile mussels. They then fall off the host fish and settle into the sediment, where they begin their journey to adulthood.

North America has the greatest diversity of freshwater mussels in the world, and many of these mussels are highly imperiled. Currently, there are 15 species in that category in Florida, and researchers have not identified the host fish species on which many of these mussels rely. To ensure mussels are able to successfully reproduce, it is critical that specific host fish are present and in relatively great abundance. Therefore, protecting these fish stocks through regulations and habitat restoration is just as important as protecting the mussels themselves.

Host-fish research has started at the FWC’s Blackwater Research and Development Center in Holt, Florida to address this knowledge gap. In spring 2012, biologists collected southern fatmucket specimens from the Escambia River; however, potential host fish were collected from the Blackwater River, which lacks existing mussel species. This is important because fish can develop immunity to larval mussels from a previous encounter. So researchers collected fish from a river with no mussels to ensure those used in the experiment had not previously come in contact with larval mussels. Fish collected for the study included several species of sunfish, bass, minnows and darters. These species represented the range of fish southern fatmuckets might encounter in the wild, including the two species researchers had already identified as host fish for this species – largemouth bass and bluegill.

The potential host fish were introduced to the larval mussels inside containers of water. Researchers used small air bubbles to make sure the larvae remained suspended in the water, increasing their chances of encountering a fish during the introduction period. Fish were exposed to the larval mussels for 30 minutes and then returned to their respective aquariums. Each aquarium was equipped with a filter cup to collect larval mussels and transformed juvenile mussels that fell off the fish.

Researchers counted more than 3,000 juvenile mussels during the study, most coming from tanks containing bass and sunfish. The system and techniques used by the biologists proved to be effective, as two previously known host fish were confirmed during the study. In addition, three new species were identified as possible host fish for the southern fatmucket: spotted bass, shadow bass and blackspotted topminnow. But because of the small sample size, additional research is needed before these three species are confirmed as host fish.

With a successful experimental system now in place, researchers plan to conduct future studies to determine the host-fish species for imperiled mussels in Northwest Florida. Identifying the host fish requirements of these imperiled mussel species will help lay the foundation for their conservation.