The distinct channels along the whorls of the island apple snail. 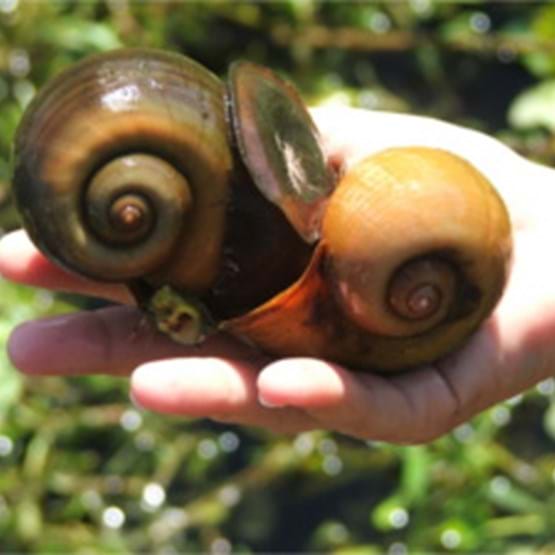 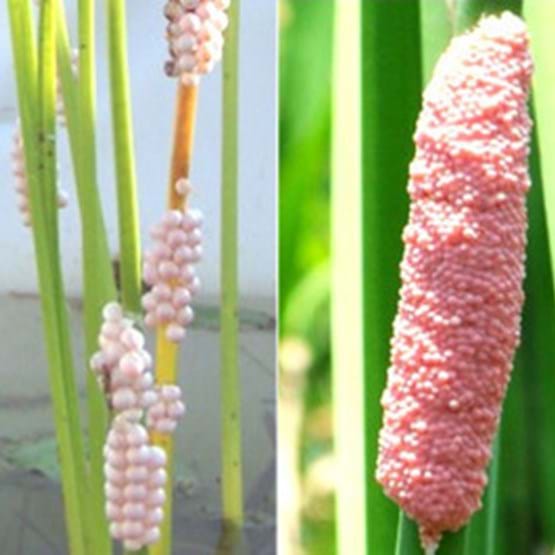 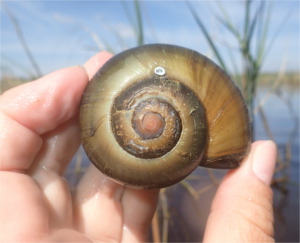 In the last decade, apple snails have received attention because of their ability to damage wetland crops through foraging. Channeled and island apple snails are opportunistic feeders that consume a variety of aquatic vegetation, fruits and vegetables, algae, remains of decaying organisms and other snail eggs. Because of damage to crops, the channeled apple snailis listed as one of the world’s worst invaders. There is also concern that the snail’s haphazard appetite for large amounts of aquatic vegetation could alter aquatic ecosystems. In Florida, an additional concern is the possible displacement of the native Florida apple snail.

Apple snails vary in size and shape. The Florida apple snail is typically 2-3 inches long and the shell is often flat across the top. The island and channeled apple snails are typically larger and have a distinct channel between the whorls. The island apple snail is the largest of the known species in Florida with shell sizes up to five inches in length. Similarities in appearance among the exotic species can make identification very difficult. Snails in wild populations range in shell color from yellow to brownish-black, and may contain stripes or dimpling. Selective breeding in the aquarium trade has led to color variations and patterns; snails may have bright shell colors (e.g., yellow/orange, yellow/green, or copper) and the tissues of the foot may have pigment variations ranging from yellow to orange to gray.

While the native Florida apple snail can take up to six months to reach sexual maturity the exotics, island and channeled, reach sexual maturity at approximately two to three months of age. These species lay eggs above the waterline on almost any hard surface. The size, shape and number of eggs can be helpful in identification; however, egg clutches can vary in size, color and number of eggs depending on water conditions, season, food availability and age of the snail. The egg masses of the Florida apple snail have the largest individual eggs of those species in Florida (about the size of a pea), but the fewest eggs per clutch, typically 20-80. Egg clutches of the exotic island apple snail tend to have smaller-diameter eggs (about the size of a pin-head) that are more densely packed with many layers of eggs. Typically the length of the clutch may be several inches and can have up to 2,000 eggs. Clutches of the channeled apple snailhave larger eggs (slightly larger than pin-head) and fewer total eggs (up to 800). When laid, the Florida apple snail eggs are a pale salmon, and turn white quickly. Island and channeled apple snails lay “pink” eggs that turn white/ grey before hatching. Unfortunately, using egg masses for apple snail identification can be difficult because of variations caused by environmental factors and all turn white before hatching.

Currently there is little FWC can do to stem the exotic apple snail populations, as is the case for most established exotic species that are often part of the exotic pet trade. Federal law states that it is illegal for apple snails to be imported across state lines. The FWC does suggest that owners of these snails please refrain from releasing them into the wild.