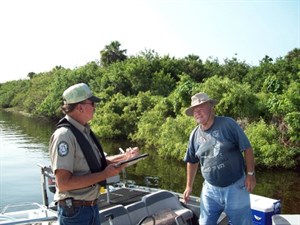 Have you ever been fishing on a freshwater lake and had a Florida Fish and Wildlife Conservation Commission (FWC) biologist approach you about your fishing trip? Some of the questions a biologist may have asked would be: How many hours have you been fishing? What fish species are you targeting? How many have you caught and/or harvested? These questions are all part of what fisheries biologists term a "creel survey," or angler survey.

FWC biologists use the data obtained from creel surveys to assess the status of Florida's recreational freshwater fisheries, in particular, its popular largemouth bass, black crappie, and sunfish (panfish or bream) fisheries. Choosing which bodies of water to conduct creel surveys is based on a variety of factors, such as whether the body of water has historically supported quality fisheries and whether management activities of the lake, pond, river or stream need to be evaluated.

Creel surveys are just one tool used by the FWC to assess the status of sport fish populations within the state and to ensure a good fishing experience for both its citizens and visitors.

Creel surveys were conducted on 18 water bodies between July 1, 2008 and June 30, 2009. Creel survey durations may vary from site to site but were chosen by local biologists to capture the peak sportfishing season for each body of water. Because the length of these creel surveys and the surface area varies among water bodies, creel estimates are divided by lake size that are measured in hectares (a hectare is roughly 2.5 acres) and the duration of the creel survey (per 100 days). By doing this, comparisons of these estimates can be made among water bodies. Thus, sportfish-directed angling effort is expressed as the number of hours fished or angler-hours per hectare per 100 days. Catch and harvest are expressed as the number of fish caught per hectare per 100 days.

Lakes deemed to have the best fishing are those with the greatest angler success rate (number of fish caught per angler hour). Typically, an angler success rate is only estimated for largemouth bass (Micropterus salmoides), because catch-and-release is a common practice with this fishery.

Creel surveys are also used by fisheries biologists to obtain "human dimensions" data. Human dimensions is a term used to describe the human or angler component of freshwater fisheries and allows biologists to obtain data regarding anglers socioeconomics (such as background, attitudes, beliefs, expectations, motivations, values, or economics). From these data, fisheries managers can better identify and understand their stakeholders and assess how anglers' needs and desires are being met. For example, if managers find that angler satisfaction is low, management actions (regulation changes, sportfish stocking or habitat manipulation) may be implemented.

Data may also be used by managers to better understand why anglers choose to fish a particular water body or take part in certain practices (like catch-and-release). Creel data regarding the economic output of freshwater anglers allows managers to gauge the importance of a particular body of water. These data can further be used to measure the contribution of freshwater recreational fisheries to local economies. Other common human dimensions data obtained from creel surveys include comparing the number of state residents to the number of non-resident anglers and the number of anglers fishing in tournaments versus non-tournament anglers.