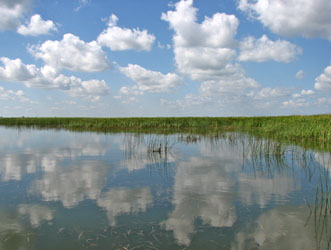 Lake Okeechobee is Florida's largest lake and the second largest body of fresh water in the contiguous United States. The word Okeechobee comes from the Seminole Indian language "Oki" (water) and "Chubi" (big) and means "big water." These early Floridians chose the name well. Vast surface area (730 square miles), shallowness (averaging only nine feet deep) and enormous habitat diversity makes the ecosystem unique on the North American continent. The lake is a multiple-use resource, which supports valuable commercial and sport fisheries, provides flood control, and acts as a reservoir for potable and irrigation water for much of south Florida.

Lake Okeechobee is located on the south-central portion of the Florida peninsula at latitudes 27o 12'N to 26o 40'N and longitudes 81o 07'W to 80o 37'W. Major natural tributaries to the lake are Fisheating Creek, Taylor Creek and the Kissimmee River. Sheet outflow occurred historically across the entire southern rim into the Everglades. Prior to the 1900's, water quality was characterized as clear and alkaline, and bottom sediments were described as "clean sand." Levee and canal construction during the first half of the century confined the lake to a smaller area, eliminated overflow along the south shore, and facilitated back-pumping of excess water from the Everglades agricultural area into the lake. During the past 30 years, rising nutrient levels and periodic increases in the lake stage regulatory schedules have decreased habitat quality and pushed the system nearer a hyper-eutrophic and ecologically undesirable state.

Lake Okeechobee is nationally recognized as supporting high quality largemouth bass and black crappie fisheries. The lake also supports a commercial fishery dominated by catfish species. However, the commercial fishery is also nationally unique in that a limited entry fishery (ten nets) exists for haul seine gear which is permitted to legally harvest and sell bluegill and redear sunfish. Freshwater fishing retail sales in the five counties surrounding Lake Okeechobee were estimated at more than $117 million during 2000. Biologically, Lake Okeechobee can successively support recreational and commercial fishery interests. Fishery management concerns on Lake Okeechobee not only require allocating available fishery resources between recreational and commercial interests, but must also be concerned with resolution of socio-political issues that result from user conflicts.

Aquatic plant communities benefit fish by providing spawning habitat, serving as refuge areas from the environment and predators, and support an intricate food web by providing nutrients for invertebrates and herbivorous fishes, which serve as forage. Despite ecological advantages provided by aquatic plants to fishes and wildlife on Lake Okeechobee, controversy over management of vegetation continues among federal and state agencies with regulatory authority for aquatic plant management, water quality and supply, flood control, and fish and wildlife management.

Changes in water level and differences in plant community structural complexity and water quality within vegetation communities exert the greatest effect on fish distribution in the littoral zone of Lake Okeechobee. Historically, bulrush has yielded the highest average numbers for total fish and game fish in block net sampling conducted on Lake Okeechobee. Importance of bulrush as habitat for adult game fishes has long been recognized by fisheries biologists, and bulrush is frequently planted during lake restoration and habitat enhancement projects.

Submersed vegetation types provide important habitat for forage fish, such as minnows shiners, and small bream. A positive relationship between hydrilla and production of juvenile game fish and forage fish has been documented by fisheries biologists. Dominant fish species abundance estimates for hydrilla, eelgrass, and Illinois pondweed (peppergrass) were similar, which indicates equivalent habitat value for these vegetation types.

The hurricanes on Lake Okeechobee during 2004 (particularly Hurricanes Frances and Jeanne) caused brief high water level surges to over 18 feet and, together with high winds, had a devastating effect on many plant communities. From the constant beating of high wind and waves, thousands of acres of plants such as bulrush, peppergrass, eelgrass and hydrilla were uprooted or broken off. Plants near the bottom or in protected areas were subjected to die-off from little or no sunlight reaching them as a result of highly turbid water over a long period of time.

The drought starting in 2006 that struck much of the state of Florida, lowered the lake level to an all-time record of 8.82 ft. msl (July 2007). Periods of drought have occurred on Lake Okeechobee about every ten years. The drought actually helped by allowing most of the emergent vegetation that was lost to be replaced by new plants. After Tropical Storm Fay (August 2008), when water levels rose quickly (luckily not too fast to damage new vegetation), thousands of acres of new bulrush, spikerush and other desirable emergent plants covered old established areas as well as many new areas where vegetation had not been in recent memory. Submerged vegetation such as peppergrass, eelgrass and hydrilla also returned. With the return of vegetation, many aquatic insect populations also increased, providing a food source for bait fish (such as minnows and shad). With this renewed food source and resurgence in vegetative habitat, many fish have had large spawns since Tropical Storm Fay, causing fisherman to see an increase of many game species. Future years should continue to see an increase in size and numbers of fish populations provided the habitat and food base also continues to improve.

The special bass regulation on lake Okeechobee has been replaced by the new streamlined statewide bass regulation: For largemouth bass only one may be 16 inches or longer in total length per angler per day, with no minimum length limit. The bag limit remains the same, at five. For more information check our Largemouth Bass Regulation Rack Card.

Black crappie (Speck) under 10 inches must be released. The bag limit is 25.

For Crappie, Bluegill, and Shellcracker fishing contact: Marshall Shockley at 863-763-0466

A Lake Okeechobeee brochure and website are available courtesy of the South Florida Water Management District.  Real-time water level data from the USGS gauge at Buckhead Lock and from the SFWMD are also available.

After lower lake levels for most of the year, water levels on Lake Okeechobee have started to rise as the rainy season settles in. The current water level on Lake Okeechobee as of June 8, 2020 is 11.97ft. NGVD, roughly a foot higher than this time last year. Lower lake levels the past two years have helped clear the water in portions of the marsh, allowing submerged vegetation like Muskgrass (Shrimp Grass), Eelgrass (Tapegrass), Hydrilla, and Pondweed (Peppergrass) to make improvements in acreage lost after Hurricane Irma and periods of high water. Emergent plants like Bulrush and Spikerush have also been able to expand during these low water periods.

With rising water levels, Largemouth Bass will be able to access more open water and hydrated vegetation. Target bass in edge habitats, such as when vegetation ends or changes types. Bass inhabit these areas as a way to better ambush prey while hiding in the shadows. Look out for vegetation stands that may have changed during recent low water and sandbars that may be more prominent. The fishing should be best early in the morning on the outside edges of the shoreline vegetation (mainly bulrush, eelgrass, and knotgrass) and as the months and days get warmer, look for deeper, shady spots on the rim canal. Try topwater plugs, crank baits (shad designs and colors), and spinner baits in the grass flats, and plastic worms, senkos, flukes, and flipping jigs in the heavier cover. Golden shiners are the best live bait for largemouth bass. If you’re one of the lucky anglers to catch a bass eight pounds or larger don’t forget to register with TrophyCatch so you can say “My trophy swims in Florida,” and earn gift cards and other prizes.

Black crappie (speck) fishing was strong this past spring, with anglers reporting abundant fish. Fishing in the Kissimmee River will be best during times the river is flowing, but be aware of fast moving currents during this rainy season. Angling effort should be concentrated near the edges of vegetation stands. With rising temperatures fishing will be fair, and the best angling will occur early and late in the day. Use the usual fishing techniques for crappie throughout this time. Minnows should be suspended at various depths to locate schools. Jig fishing is most productive, as you can cover a great deal more area. The secret to successful crappie fishing is to move often, until you locate a school.

Bluegill and redear (shellcracker) fishing have been off to a great start this summer. The last few years of electrofishing and trawling surveys continue to show great numbers of these panfish throughout the lake, and those fish are showing up on hooks. Look for beds in open, sandy-bottom areas in the marsh. You can find many bluegill and redear together in areas such as this. Most redear are taken on live worms. Beetle‑spins, grass shrimp, red worms, and crickets are the preferred baits for bluegill.

TrophyCatch is FWC's citizen-science program that rewards anglers for documenting and releasing trophy bass 8 pounds or larger. The following TrophyCatch bass have been submitted from Lake Okeechobee: