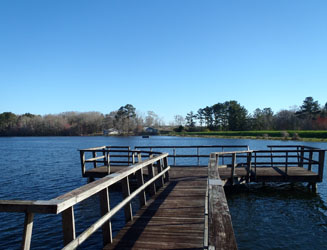 Lake Victor is a 130-acre artificial impoundment constructed in 1966 and opened to fishing in 1968. It has an average depth of 8 feet and a maximum depth of 23 feet. Deepest areas are near the dam and along the old stream bed. A considerable amount of timber remains, providing fish habitat and cover. The lake has been previously stocked with sport fish include largemouth bass, bluegill, redear sunfish (shellcrackers), and channel catfish. The lake also supports a fairly good population of black crappie which appear to peak every 5 to 7-years. The lake is located in north Holmes County, south of S.R. 2, approximately one mile west of the New Hope community. It is within easy commuting distance from Chipley, Bonifay, DeFuniak Springs, and south Alabama. There is a concrete boat ramp with ample parking located near the dam on the northeast side of the lake.There are no public upland recreational facilities or boat rentals available. Lake Victor RV Park LLC, a privately operated camping area with an unimproved (oyster shell) boat ramp is located on the southeast side of the lake. For available camp sites or fishing conditions they may be reached at 850-956-4526.

Lake Victor should produce plenty of Largemouth Bass this summer ideally sized for eating. Bass have long since left their beds and are becoming plumper. Anglers should target these fish in deeper water near the dam and around stumps in some of the coves. During recent sampling events, which produced multiple bass heavier than three pounds, fish were in water deeper than four feet. As water temperatures move into the 80’s, anglers will be more successful during the early morning and the early evening hours. In the hours mentioned above, noisy topwater or Rat-L-Trap style crankbaits can prove effective. While throwing the bait out and rapidly retrieving it may produce an occasional bite, anglers should have better success with an erratic action. As water temperature rises throughout the day, fishers may want to switch to soft plastics and try a slow retrieval to entice the lethargic bass. Fishers should avoid the shallow, densely vegetated patches around the lake. Ideally, anglers will have better luck targeting the open water edges near the shoreline vegetation where bass often cruise.

As with Largemouth Bass, the most productive bream fishing seems to be early morning and evening. Larger Bluegill and Redear Sunfish may continue to bed, look for lighter colored areas on the bottom which indicate spawning activity. Anglers should fish these areas with live baits such as red worms, wigglers, and crickets. Fish the live baits on light tackle in three to six feet of water. Another productive method for catching hungry bream are artificial baits such as beetle spins, rooster tails, or curly-tailed grubs. When not targeting spawning aggregates, fishers should target deeper holes or the old creek channels. During recent sampling events, most bream were in water deeper than four feet. Bream often remain deep to escape the summer heat.

As always, Channel Catfish will be hard-pressed to resist a juicy beef or chicken liver, and earthworms. Fishing these baits on the bottom, in deep water off the fishing pier or near the dam, or with a float, suspending the bait over any available timber pile, should produce results. Anglers having trouble keeping messy livers on the hook should try wrapping it in surgical gauze or pantyhose. Additionally, using longer rods will add casting distance and, concurrently, increase the amount of water available for fishing.

TrophyCatch is FWC's citizen-science program that rewards anglers for documenting and releasing trophy bass 8 pounds or larger. The following TrophyCatch bass have been submitted from Lake Victor: