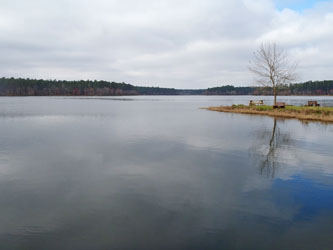 Hurricane Lake is a 318-acre man-made impoundment constructed in 1971, opened to fishing in 1973, and is designated as a Fish Management Area. The lake has an average depth of 7 feet and a maximum depth of 25 feet with the deepest areas located near the dam and along the old streambed. A considerable amount of flooded timber remains, providing fish habitat. The lake has been stocked with Largemouth Bass, Bluegill, Redear Sunfish (shellcracker), and Channel Catfish. Hurricane Lake is located in northwest Okaloosa County within the Blackwater State Forest approximately 12 miles northwest of Baker, FL. Concrete boat ramps with courtesy docks are located in both the north and south campgrounds. The south campground is accessible from Kennedy Bridge Road off Beaver Creek Road north of SR 4. This campground contains primitive (no electric or water hookups) camping sites maintained by the Florida Forest Service. Restroom and picnic facilities are available. Several earthen fishing fingers are located in this area for use by bank fishermen. Construction of a fishing pier in the south campground is planned for the near future. An informational kiosk is located adjacent to the boat ramp. The north campground is accessible from Hurricane Lake North Campground Road off Beaver Creek Road north of Kennedy Bridge Road. A handicapped accessible fishing pier and an informational kiosk are located adjacent to the boat ramp. This campground has campsites with electrical and water hookups which are maintained by DOF. Bait, supplies, and other conveniences are available in nearby Baker, Blackmon, and Munson. Hurricane Lake is subject to the rules and regulations currently in effect for Fish Management Areas. Please refer to a current copy of Florida Freshwater Sport Fishing Regulations. Gasoline boat motors are prohibited from use on Hurricane Lake; however, use of electric trolling motors is allowed.

The FWC installed four brush-style fish attractor locations in 2017. These areas should congregate bass and provide valuable foraging habitat for juvenile bass. During this quarter, properly identifying local spawning behavior and how fish are reacting to the water temperature regime will likely determine how successful the fishing trips turnout. April through June brings increasing water temperatures to Hurricane Lake. Largemouth Bass fishers should continue to be successful throughout the quarter. Bass will move from shallower habitat used during spawning activities into waters five feet and deeper as temperatures rise later in the quarter. As water temperatures move into the upper 70’s and higher, anglers fishing during dawn and dusk can often catch fish moving into shallow water to feed. Plastic worms and lizards rigged Carolina- or Texas-style, along with Rat-L-Traps and crankbaits can all be effective. If bass are actively feeding along the surface, these fish should be targeted with noisy topwater baits (e.g., buzzbaits&jerkbaits) during low light conditions or with soft-plastic baits when the Florida sun is burning bright. Currently, the Largemouth Bass population consists of a large number of quality-sized fish (five pounds and above).

As the water temperature ranges from 68 to 80 degrees, the bream should begin to gather on beds throughout the lake. During most years, anglers can expect this to begin in late-March and last through September.Redear Sunfish (shellcracker) tend to nest in “communities,” meaning there will often be numerous nests built in the same area. Bluegill will often use the same nesting areas previously used by shellcracker and also tend to nest in “communities.” Light tackle with earthworms, crickets, beetlespins, roostertails, or small jigs can produce nice Redear Sunfish and Bluegill.

Black Crappie fishing should continue to be productive until the water temperature rises into the 70’s and above. The fish will move out of shallow water and, generally, congregate around any hard structure in deeper water to escape the summer heat. During this quarter, night fishing can be productive. Many successful anglers will hang a light over the boat to attract baitfish to the area, which in turn will attract crappie. Small feather or curly-tailed crappie jigs and small minnows are usually the most productive baits. However, if crappie jigs or live minnows are not inducing bites, try crankbaits and spinnerbaits.

As always, catfish are normally most active at dawn and in the evening. Catfish are hard-pressed to resist a juicy beef or chicken liver. If the bait continues to fall off of the hook, try wrapping it in surgical gauze or pantyhose and stretch the fabric to release the odor from the bait. If the weeds are a nuisance, then try rigging a small bobber in between the weight and the hook to keep the bait suspended above any vegetation.

Be the first to submit a trophy bass from Hurricane Lake!