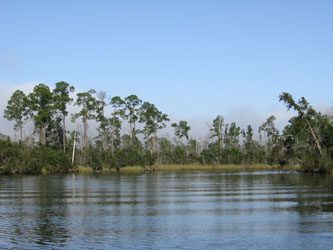 Fishing success on the upper reaches of the Blackwater River generally depends on water levels.  High water makes this area difficult to fish; thus, fishermen should always check river levels before visiting the upper river. View current river conditions throughout Florida online. Anglers not fortunate enough to own vessels for fishing are reminded that numerous canoe outfitters are present in this watershed, and provide shuttling services for launching and pickup.

Three access areas to the upper river are provided by public boat ramps at Blackwater River State Park (off Deaton Bridge Road), three miles west of Holt (on Bryant Bridge Road), and a recently constructed county maintained ramp north of Bryant Bridge, in the Blackwater River State Forest. The latter two offer great opportunities for anglers. The summertime is the height of canoeing season. If you aren’t able to hit the water on a weekday during this time of year, be prepared for a crowd of paddlers that aren’t necessarily concerned about spooking your fish. Generally speaking, boat traffic dissipates the farther up river you travel. Other unimproved landings, suitable for canoes or light johnboats, are scattered along the remaining length of the upper river.

The Yellow River is a 92-mile-long river of which 61 miles occur in Florida's Okaloosa, Santa Rosa and Walton counties. The Yellow River flows in a southwesterly direction into Blackwater Bay, an arm of Pensacola Bay.  One major tributary, the Shoal River, joins the Yellow near Crestview, Florida.  The Shoal River lies entirely within Florida with a length of 33 miles.  The Yellow River has a sandy bottom, white beaches and large sandbars.  A 56-mile section of River from SR-2 to SR-87 is designated the Yellow River Paddling Trail. View current river conditions throughout Florida.

There are numerous access points to the lower Yellow River system provided by two fish camps near the mouth of the river (Brown's and Lindsey's), south of Milton, and numerous landings along the river, including Guest Lake Landing (South of Holt), Milligan (below Highway 90), Crestview (highways 85 and 90), Blackman (Highway 2), and the Highway 87 crossing southeast of Milton.

NOTE: The Florida Fish & Wildlife Conservation Commission reminds anglers that it is illegal to possess Alligator gar, or even target them. That means you are breaking the law even if you intend to release the fish. Alligator gar are a native fish to Panhandle Rivers and can grow to more than 150 pounds. Their gator like snout is distinctly different than spotted and longnose gar, the two other species of gar found it the panhandle. Researchers are in the process of estimating the population size and will possibly remove the harvest restriction of this prehistoric fish. However, until then harvest is restricted.

Fair fishing for Largemouth bass is expected January through the middle of February and should improve late in the month on into early March. The Blackwater River is truly one of your best chances for a big Largemouth bass, compared to other rivers in northwest Florida. This time of year, look for coves off the main river that have reduced current and deep water, preferably with a mud bottom. This dark-colored sediment absorbs the sun’s energy more readily than light-colored sand bottoms and heats up the water around it quicker. Target lay downs and stumps with spinnerbaits and crankbaits by casting beyond the area and bumping the structure during the retrieve. If faster moving lures don’t produce, down-size bait offerings and slow down the retrieve. Finesse and trick worms work well when paired with an 1/8 oz shaky head or bullet sinker when Texas-rigged. Match this bait with a spinning rod or light-weight bait casting outfit along with 6-8 lb. line and probe deeper structure that will hold lethargic fish this time of year.

Bream fishing may be a bit slow this time of the year but should pick up by the end of March. If you are fishing in the tidal section of the river, try to catch a falling tide for best results. Use live crickets on a light-wire #4-6 Aberdeen hook fished beneath a bobber and fish around woody-cover or weed lines. If fishing farther upriver, try earthworms near heavy cover in deep water.

Though largemouth bass and bream get most of the attention, stripers are the hottest game in town this time of year. When the water temp dips below 60 degrees F, it’s time to load up and hit the river for stripers and hybrids. This entire fishery is a result of long-term stocking by our state fish hatcheries. The area near the mouth of Pond Creek is good spot to start your search for stripers. The best baits have been live shrimp under a popping cork, mullet, bucktail jigs, and the Alabama rig.

In addition to these species, the lower Blackwater River also harbors other sport fish such as spotted seatrout and redfish. As the water temperature cools, spotted seatrout move out of the bays and into the river mouths. Large numbers of these fish can be found in deep holes and canals that enter bayous. Live bait works well, but artificial lures work just as well and are more efficient at catching numbers of fish once large schools get stacked up in these deep holes. Soft plastic baits threaded onto a ¼ to ½ oz jig head catch plenty of fish, as well as Mirrolures such as the Mirrodine or the ‘ole trusty 52mr. The most successful anglers slowly troll the riverbank between the city of Milton and Interstate-10 bridge until an active school is located. They then anchor up or use the trolling motor to hold position and load the boat with these tasty critters.

Fishing success on the upper reaches of the Blackwater River generally depends on water levels. High water makes this area difficult to fish; thus, anglers should always check river levels before visiting the upper river. Current water levels throughout Florida may be found on the internet at www.usgs.gov. Anglers not fortunate enough to own vessels for fishing are reminded that numerous canoe outfitters are present in this watershed and provide shuttling services for launching and pickup.

Good largemouth bass fishing is anticipated for the Yellow River during the months of January through March. Anglers who are determined to venture out into the cooler weather should be rewarded with good bass fishing. During the colder periods of the year, anglers tend to have more luck in slack-water areas. Places out of the current usually have water temperatures a few degrees warmer than areas with moving water. Areas such as Log Lake and the slough downstream of Canoe Creek have this type of habitat. Use Texas-rigged Zoom Baby Bush Hawgs and other soft plastics to pick this cover apart and you should be rewarded with nice bucket mouth. Farther downstream, several nice fish were sampled in the marsh areas at the mouth of the Yellow River, Skim Lake, and the Weaver River. Once again, look for outside bends and fallen trees. The current here is slower than farther upstream, so you can get by with lighter-weighted plastics that fall seductively in front of a hungry largemouth. DOA shrimp and un-weighted Senkos fit the bill for this kind of fishing.

The Yellow River is a great place to catch striped bass, and the winter months are the best time to do it. FWC fishery biologists anticipate good fishing for stripers because of long-term stocking by our state fish hatcheries. A good place to fish for stripers in the winter and early spring is the delta area, downstream from Highway 87 to Blackwater Bay. The deep outside bends and holes in the Weaver River are a great place to start. Dawn and dusk are the prime times for striper fishing. Live mullet or menhaden make good baits. As for artificial baits, try large surface plugs like a Whopper Plopper and soft-plastic swimbaits Tsunami paddle tails rigged on a 3/8 oz jighead.

Bream fishing may be a bit slow this time of the year, but live bait fished around structure should produce some fish. Bring crickets and worms if possible, because one type of bait will generally out fish the other on any given day. If you are fishing in the tidal section of the river, try to catch a falling tide for best results. There were also several big redear sunfish (such as the one pictured) observed in the middle section of the river between Log Lake and Guest Lake during recent surveys by FWC biologists. Try to fish slightly deeper water in places of reduced current, or wood cover located in the runs and outside bends of the river.

In addition to bass, the lower Yellow River harbors other sport fish such as spotted seatrout and redfish. The winter season is usually a good time to fish for seatrout because they tend to school in large numbers near the mouth of the river and in deep holes. The mouth of the Yellow River and the outside bends of the Weaver River are good places to begin your search. Troll jerkbaits such as a Rapala Minnow or Bandit Crankbaits in the 200 model until the school is located, then switch to casting. If fishing for redfish, locals insist on having a gold Johnson Sprite spoon in their arsenal.

The upper Yellow River should provide a mixed bag of largemouth bass, spotted bass, redear sunfish (shellcracker), bluegill, spotted sunfish, warmouth and shadow bass. Fishing success in the upper river depends largely upon water levels. Both high and low water levels make this area difficult to fish; thus, anglers should always check the river stage before visiting the upper river. Current river conditions throughout Florida may be accessed on the internet at www.usgs.gov.

Flathead catfish are established in the upper reach of the river. Anglers are reminded that the flathead catfish is an exotic species to Florida, and keeping all fish caught is highly encouraged, since this species may negatively impact native sport fish populations (e.g., sunfish and catfish). Anglers targeting these “river giants” should use live bait. The optimal bait for the species is sunfish, but anglers are reminded to familiarize themselves with current regulations. Live sunfish can only be used for bait, if collected and fished using hook and line. Sunfish cannot be used as bait on any other fishing gear (e.g., bush hooks or trot lines). Optimal fishing locations for this fish include deep flowing areas, downstream of a sharp bend in the river, behind large snags. Fishing for these river giants can be done from big sandbars with your baits fished in the outside bends of the river.

Be the first to submit a trophy bass from the Blackwater or Yellow Rivers!