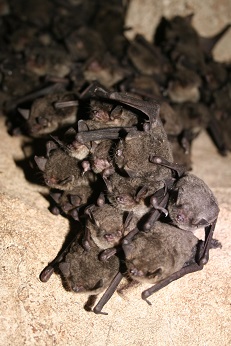 In Florida, there are 13 native bat species, and 7 “accidental” species that only have a few records of occurrence in the northern or southern extremes of the state (Marks and Marks 2006). Bats are ecologically and economically beneficial. They serve critical roles worldwide as insect pest controllers, pollinators, seed-dispersers and fertilizers. Learn more about bats at the FWC Bat Species Profile.

Florida’s bats are insectivorous, meaning they eat insects, including beetles, mosquitoes, moths and other agriculture and garden pests. A single bat can eat hundreds of insects in a night!

Florida’s bats are facing many challenges, including loss of natural roosting sites in trees and caves. Outside of Florida, a disease called white-nose syndrome (WNS) has also killed millions of cave-roosting bats and is spreading rapidly. As of early 2018, WNS has not reached Florida, but it remains a serious threat.

Although bats are facing these challenges, there are things people can do to help.

How You Can Help Bats Thrive in Florida 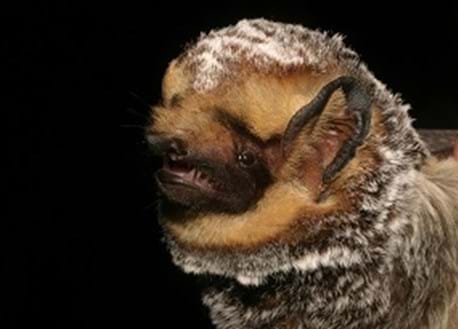 Bats are beneficial mammals that are of little threat to people. Rabies, a virus usually transmitted from a bite, affects a very small portion of bats — perhaps only one among every few hundred bats across all of the bat populations in Florida. However, people should not handle bats, whether they are sick, injured or dead. For more information about bats and disease, including what to do if a person makes contact with a bat, contact your county health department, the Florida Department of Health, or the Centers for Disease Control and Prevention (CDC). 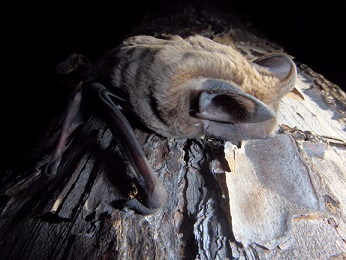 It is illegal to kill bats in Florida in accordance with Florida Administrative Code rule 68A-4.001 General Prohibitions. Since bats are particularly vulnerable to disturbance and harm when they are roosting in buildings and other man-made structures, protections for bats in structures are also included in rule 68A-9.010 Taking Nuisance Wildlife. This rule does not allow the use of pesticides or poisons for the purpose of harming, killing, or deterring bats. This nuisance wildlife rule also states the minimum requirements that need to be followed if someone is going to remove bats from buildings and other structures. If you think you have a bat or bat colony roosting in your home or other structure, learn more about what you can do by visiting the Bats in Buildings web page.

Bats in Florida are mainly insectivorous and locate their prey using echolocation, a method of using sound waves to navigate and locate food. Many of Florida’s bat species roost colonially and colonies can range from a few bats to many thousands. However, several of Florida’s bat species are solitary roosters and prefer to sleep alone. The most important natural roost site for bats in Florida are trees with cavities, trees with peeling bark, palms, and caves.

White-nose syndrome (WNS) is named for the white fungus that appears on the muzzle and other areas of exposed skin of hibernating bats.

Although bats are rabies vectors, raccoons and foxes have a higher incidence of rabies than bats do. Still, many people fear bats more as a rabies vector, and the primary reason is because of misinformation or a lack of knowledge about bats.

Inhaling histoplasmosis spores can cause an infection in the lungs. However many people that do inhale its spores do not get sick.

Do you suspect there are bats in your building? Learn to identify bats and what to do about them.

Rabies Prevention and Control in Florida