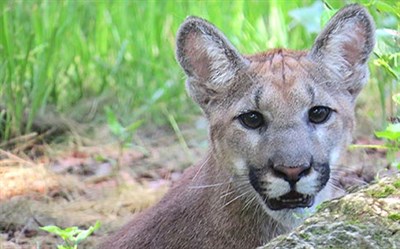 Learning about an animal’s basic biological needs is important to understanding how that species is adapted to its environment. For example, panthers are meat-eaters and they need sufficient space to find food with little competition from other panthers.  In this section you can learn about what panthers eat, how they find their prey, how they reproduce and how long they live. 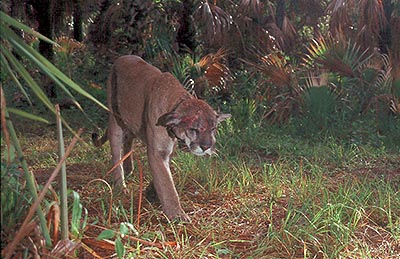 Panthers can live up to 20 years or more in the wild. Female kittens have a good chance of living 10 years or more. Males have a tougher time, but if they survive to five or six years old, they are likely to live even longer to 10 or more years.

The two most common causes of panther deaths are vehicle collisions and panthers killing other panthers (intraspecific aggression). 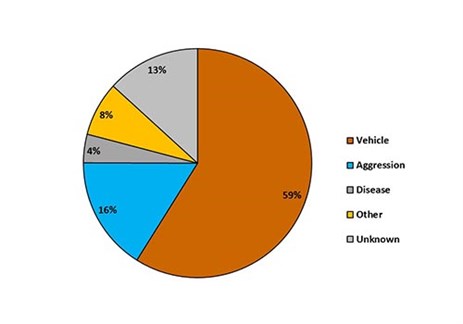 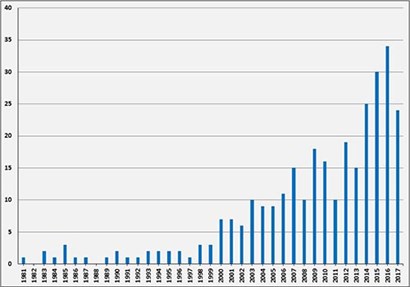 Concurrent with increasing panther population numbers, the number of Florida panthers killed by collisions with vehicles has been on the increase since 2000. Prior to 2000, panther roadkills were four or fewer a year, but beginning in 2000, these numbers have ranged from six to 34 annually.

Figure 3. All Panther Roadkills by Sex
The pie chart to the right shows the number of all panther roadkills by sex. 40% of the kills were male and 60% were female. More male panthers are killed in vehicle collisions than female panthers.

Males have larger home ranges than females, and their ranges often include roads. Young male panthers searching for their own ranges often end up crossing roads more frequently than adult panthers. This places them at a greater risk of colliding with a vehicle. Panthers less than 3 years old represent 70 percent of all roadkills; 22 percent of these deaths were kittens young enough to still be with their mother. 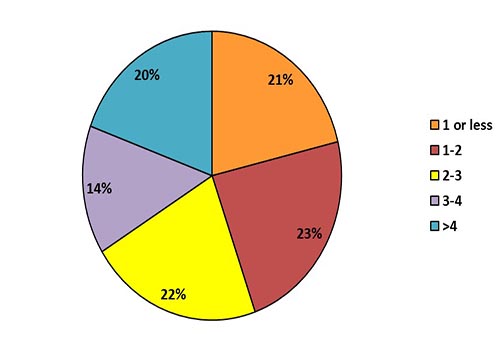 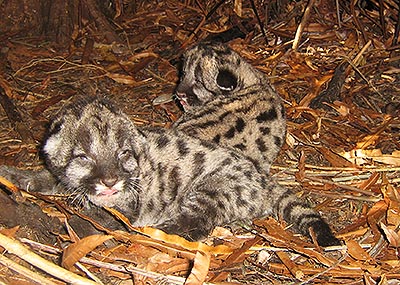 Female panthers reach sexual maturity at about one and a half to two and a half years old, and males at about three years old.

Panthers are polygamous, meaning they may mate with more than one partner. Males will try to prevent other males from mating with females within their ranges but they are not always successful. Mating pairs may remain together for up to a week, sleeping and hunting together.

Panthers, like all other cats with the possible exception of lions, are induced ovulators. This means the stimulus of copulation triggers the release of the egg by the ovary. Induced ovulation is an adaptation for solitary cats to increase the probability that the egg will be fertilized. Watch this short video to see how panthers communicate and find mates.

A female panther will signify her sexual availability by the scent of her urine and through vocalizations like yowling that some people say sounds like a female human screaming. 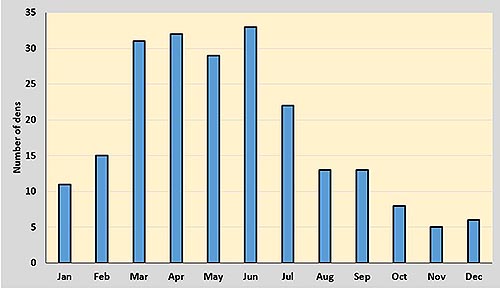 The gestation period for panther kittens is 92 to 96 days, and litters consist of one to four kittens. Births can occur at any time of year but are most common between March and July.

Figure 1. Month of Denning by Florida Panthers
Female panthers give birth to kittens most commonly between March and July.

Before giving birth, the female panther chooses a den site, usually in a palmetto thicket. Panthers don’t go to any effort to prepare a den. However, an opening is created in the dense vegetation by the mother resting and nursing kittens for several days in the same location. Kittens weigh just over a pound at birth. Their eyes are closed, and they have grayish-brown fur with dark spots.

Females will not breed again until their kittens are a year and a half to two years old and able to survive on their own. If they lose their kittens for any reason, they will again become sexually receptive and ready to mate. 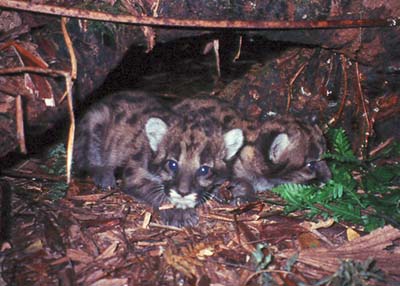 The adult female is responsible for raising the kittens and does so alone. During the two to three weeks after giving birth, the female spends most of her time nursing her kittens in the den. Still, she has to leave them to hunt and may be away for many hours.

By the time the kittens are 2 to 3 weeks old, their eyes have opened and they are able to move around the den. Their eyes are blue and their fur is spotted. They have five dark rings on their tails. The mother gradually increases her time away from them and the distance she travels. After making a kill, she will eat as much as she can and will return to the den to nurse her kittens. Cougar milk has six times more fat than cow's milk and the kittens grow rapidly. By eight weeks they weigh about 10 lbs., nine times their birth weight.

When left alone by their mother in the den, kittens sleep and play. They chase each other, and exercise their teeth and claws by chewing and scratching vegetation.

When they are about 2 months old, kittens begin to accompany their mother on hunting forays. At first she hides them nearby while she hunts. After a kill, she leads them to the site where they all feed.

By six months, the kittens’ spots are almost invisible and their blue eyes are turning brown. Gradually they are learning to hunt on their own. By nine to 12 months, they are catching small prey on their own. By one and a half years, they are still hunting small animals such as raccoon and armadillo, as well as an occasional deer or hog.

Events leading up to the separation of panther mothers and their offspring are not well documented. Panther researchers have located resident adult males near females and kittens just before the kittens dispersed. Males probably are attracted to the female's renewed sexual receptivity. Hormonal changes in the mother may cause her to encourage the offspring to disperse. In any case, by age two panther young have left their mothers to establish ranges of their own. Young females often establish a range that overlaps with their mother's range but male offspring usually are forced out of their mother's range by older males. 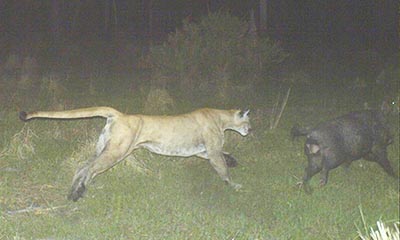 Panthers, like most cats, are solitary hunters. They are most active at the same time their prey is likely to be active: dawn and dusk. Biologists refer to animals that are most active at these times as crepuscular. During the day and particularly in the summer, panthers usually rest in a day bed made within the shade of a palmetto thicket.

When hunting, panthers stalk their prey, moving silently and then freezing their motion to avoid detection. Unlike dogs and wolves, that chase their prey until it tires, panthers rush short distances and spring as far as 15 feet for the kill. With claws extended, their front paws grasp the prey around its neck and shoulders while the claws of the hind feet dig into the prey's flanks. Panthers usually kill large prey by a bite to the back of the neck severing the spinal cord. Sometimes the animal is killed by a suffocating bite to the throat. Young deer and smaller mammals may be killed by bites to the skull.

After the kill, a panther will drag large animals such as deer or hog into an area of thick vegetation. A mother with kittens old enough to travel outside the den will call or lead her kittens to the kill. The ribs are usually chewed off and the body cavity opened. The heart, liver, and lungs are eaten, as well as the large muscle masses of the shoulders and hindquarters. The internal organs provide vitamin A and other nutrients. The large bones are broken and chewed. The panther often removes the stomach and intestines and covers them nearby with leaf litter and twigs. Smaller animals such as raccoons and rabbits are usually eaten in their entirety. Armadillos also are largely consumed whole but with the exception of their bony plates and tail.

Panthers may consume 20 to 30 pounds of meat at one time. A female panther with kittens may consume even more. After the panther has its fill, it rakes leaves, twigs and other debris over the carcass in what biologists refer to as a cache. This helps hide and protect the carcass from scavengers. If it is not too warm and humid, the panther may return to feed on the carcass for several days.

Studies by panther biologists have revealed that most of a panther’s diet is natural prey such as deer, wild hogs and raccoons. Biologists examined scats, found while tracking panthers, as well as stomach contents and feces collected during the necropsy of dead panthers. They documented that nearly 70 percent of a panther’s diet comes from deer, wild hogs and raccoons. Domesticated animals such as goats, sheep and calves are taken by panthers in areas where this prey is available. Such depredations have become more common as the Florida panther population has grown. However, domesticated prey constitutes only a small part of the panthers’ diet, according to these studies. 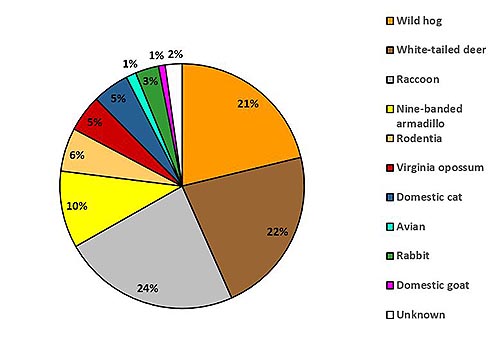