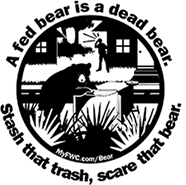 Here, FWC debunks some common myths about Florida black bears in an effort to increase popular understanding of the species.

Myth #1:Feeding black bears that wander into your yard helps the bears.

The feeding of bears, raccoons, and foxes is illegal per Florida law. Bears are opportunistic feeders and will remember where to find easy food and return to the location. If they continue to gain access to human provided foods (e.g., garbage, pet food, bird seed) they can be become food conditioned and habituated. Bears that begin to exhibit those behaviors can become a public safety risk and potentially killed by wildlife officials. Remember “A fed bear is a dead bear.” If a bear is seen in your yard, reinforce their natural fear of humans by making loud noises from a secure location (e.g., yelling, using car or air horns, or banging pots and pans together).

While the bear Family, Ursidae, is part of the Order Carnivora (Carnivores), the Florida black bear is more appropriately described as an omnivore, eating a diet composed of 80% vegetation (e.g., leaves, grasses, nuts, berries), 15% insects (e.g., bees, wasps, termites, ants), and 5% meat (e.g., carrion, opossum, armadillo). Bears will rarely try to chase down a large animal, such as an adult deer, for a meal, because it will result in a net loss of energy – a lot of energy used trying to catch the animal with very little chance of a successful catch, thus no energy gained.

Myth #3: Relocating black bears is the best and easiest way to deal with a conflict bear.

FWC has found that relocating bears is not an effective strategy to reduce human-bear conflicts. In a recent study, almost 70% of relocated bears left the area where they were moved. Bears often leave the new areas because most places where bears can be moved already have resident bear populations, which can make it difficult for the relocated bear to remain. In addition, relocated bears often try to return to their original location. Those bears wander through unfamiliar areas and cross busy roads, creating a danger to the bear and to motorists.

Relocating bears also does not always stop their conflict behavior. FWC found that at least 50% of relocated bears exhibit conflict behavior again. In those cases, even if the bear stays where it was moved, all that has been done is a shift of the conflict issue to a new neighborhood. Most locations in Florida that experience bear conflicts are in bear range, and so even if FWC removed a bear that is visiting your neighborhood, the chance of another bear finding that same food source is very high.

Bears and other wildlife that linger in neighborhoods are a symptom of the problem of wildlife having easy access to human-provided foods. If the unsecured food source--garbage, compost piles, livestock, and pet/livestock/bird foods—are eliminated, the problem is eliminated. Bears will move out of the neighborhood to search out another food source.

Myth #4: There are plenty of zoos with exhibit space for conflict bears.

The unfortunate reality is that adult black bears are not easily placed in zoos. It is a huge endeavor for a zoo to have the appropriate means to handle a large, wild bear. Captive black bears can live 30 years or more and wild bears live in forest ranges of 15 - 60 square miles, not even the best zoo can provide that type of space. Due to the space restrictions and other elements, wild bears generally self mutilate or put their caretakers at risk while trying to cope with the stress of confinement. The zoos that already have appropriate facilities generally already have bears on display. Moving a Florida black bear to a facility in another state is rarely feasible due to federal/state regulations and agreements between state wildlife agencies. FWC does maintain a list of permitted organizations that can house bears in emergency situations. 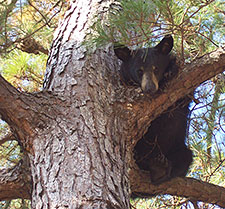 Myth #5: It’s best to run away or climb a tree to escape a black bear

Black bears have curved toe nails, naturally making them great climbers. They will commonly climb trees or send their cubs up a tree to escape a perceived danger. Nut bearing tree canopies, like oaks, are common places to find black bears feeding in the fall.
Black bears can run up to 35 mph. Running from any wild animal can also trigger a chase instinct, so it is best to back away slowly and find a secure location, like a vehicle or building.

A bear’s eyesight is very similar to that of a human. They will stand up on their hind legs to get a better view of their surroundings. However, they rely heavily on their sense of smell. A bear’s sense of smell is considered the best of any land mammal, it is seven times better than that of a bloodhound and the part of their brain involved in smell is 6 times larger than the same part of a human’s brain. Smell is how a bear “sees” the world. Current research indicates black bears can pick up a scent over a mile away.

Black bears are quite capable of running downhill — fast. Black bears can run up to 35 mph over short distances. That’s faster than the fastest human – Usain Bolt, who can run up to 27 mph.

Myth #8: When a black bear stands on its hind legs, it is a sign of aggression.

When a black bear stands on its hind legs, it is trying to get a better view and/or smell of its surroundings. This stance is not aggressive in nature, nor is it an effective running gait. Bears that are challenging one another for dominance may sometimes stand on their hind legs to grab the other bear’s shoulders as part of the challenge process. 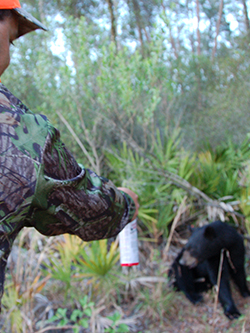 Myth # 9: It is legal to shoot a black bear on your property.

In Florida, black bears are protected by law. It is illegal to kill a bear without an FWC issued hunting or depredation permit, unless it is protect human life. A viable alternative to shooting a bear perceived as a threat is through the use of bear spray. Bear spray  is extremely effective in deterring a bear and can be used at a distance of 20-30 feet. NOTE: Always read the manufacturer’s instructions before use to ensure it is being used safely and appropriately, especially concerning wind direction. If a bear is frequenting your property there is likely a food attractant present. Review what items are on your property to help determine what is bringing the bear to your location and then visit MyFWC.com/bear to learn how to deter the bear from future visits.

Bears will still eat natural foods after they have had limited access to human provided food. Though once they have found human provided foods, like trash, pet food, or bird seed, they will continue to eat those easy to access foods until they are removed. Searching for acorns in the forest takes significant time and energy, unlike the human provided foods available in large quantities in cans, bowls, or feeders. Black bears are opportunistic and will eat just about anything that is available regardless of its original source.

Disclaimer: You should always act cautiously around wild and domestic animals even if they are not acting aggressively.

Black bear encounters can usually be avoided. Make lots of noise, such as singing or talking, when visiting in bear country. Noise makers, like bells, can also be effective at alerting a nearby bear to your presence, so as not to startle it. Any loud noise will usually be enough to alert a bear to your presence and scare them away from the area, even your yard. To prevent bears from wandering around your property, remove all possible food attractants. If you come across a bear that is not deterred by your attempts to ‘scare that bear’ at home or in the wild, you should back away slowly, retreat to a secure location, and contact your nearest FWC office about the situation.

Myth #12: All black bears have only black fur and are huge.

Female Florida black bears are usually less than 200 pounds and males average about 350 pounds. Additionally, most black bears are black (like the name implies) but in some areas of Florida they can appear to be tan or brown in color due to the absence of their outer, black guard hairs. In other areas of North America, such as British Columbia, they can even be white. The Southeastern United States only has the species Ursus americanus (black bear), there are no Ursus arctos (brown bears), so if a bear appears brown in color it is still a black bear. 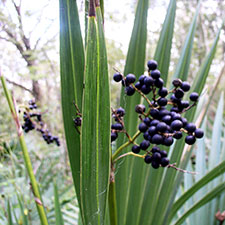 Myth #13: Black bears wander into towns and neighborhoods because there is not enough food for them in the woods.

There is no shortage of natural foods in Florida’s forests for bears, they are very opportunistic feeders and are technically omnivores. Bears typically wander into residential areas because the food they can find there is high in calories and easy to get. Bears eat about 5,000 calories a day, except in the fall when they are looking for up to 20,000 calories a day to prepare for the leaner, cooler months of winter. This translates to searching for food 18 hours a day in the forest. Because black bears are “smart enough to be lazy” and take the path of least resistance – the neighborhood. They will spend a few hours in a neighborhood getting into trash cans, bird feeders, or gardens and get the same number of calories. To learn more about how to secure your property from bears, please visit: MyFWC.com/bear

Myth #14: If a black bear attacks, you should play dead.

Black bears prefer to avoid contact with humans, but if you are being attacked by a predatory black bear, you should not play dead. If a black bear attacks in an offensive manner and physical contact is made, fight back aggressively, focusing on the face, eyes, and nose. People have successfully fought off black bear attacks using rocks, sticks, or even their bare hands!

Myth #15: Black bears are naturally aggressive towards humans and attacks are common.

Studies show black bears avoid confrontation 90% of the time. They are naturally shy animals that will generally give plenty of warnings (e.g. jaw popping, huffing ,bluff charging) before attacking. FWC has been keeping track of incidents where a person has been injured by a bear in the state of Florida since 1976 and it is a very rare event. In most cases the bear was acting in a defensive manner protecting itself, its young, or a food source.