"Sizing" up the Black Bear

Bears are "sexually dimorphic," which means that adult males are larger than adult females. However, because young, smaller males are similar in size to adult females, it is difficult to determine the sex of a bear by their size alone.

Many of us recognize that white-tailed deer body size is reduced as you travel south in North America. This difference is explained by Bergmann’s Rule, which basically states species of larger size are found in colder environments, and species of smaller size are found in warmer regions.  Bears as a Family follow this principle – arctic male polar bears generally weigh 779 to 1500 pounds, while male sun bears only weigh 100 to 140 pounds and live in equatorial regions. Black bears as a Species do not follow Bergmann’s Rule, Florida black bears on average tend to be larger than Canadian black bears, for example.

Average weights for adult bears in Florida range from 250 to 450 pounds for males and 125 to 250 pounds for females. 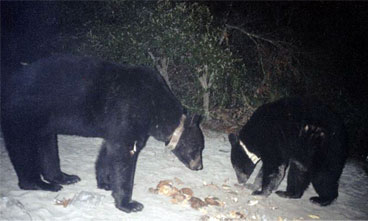 There have been two male bears that are considered the largest in the state. One was a 740 lb bear and the other was 760 lb bear, both were found in 2015 in Seminole County lingering in neighborhoods after gaining access to unsecured human-provided attractants.
The two largest female bears found in Florida were 460 pounds killed in a vehicle strike in Lake County in 2019 and the other was 400 pounds, found on the side of a road (killed by a vehicle strike) in January 2007 in Liberty County.

Bears that habitually feed on human-supplied foods such as garbage and wildlife feed or pet food can become abnormally large because of the high number of calories found in these food sources.

The weight of individual black bears varies greatly throughout the year.

Food availability is low during the winter months, even in Florida, and both male and female bears lose weight. Bears can lose up to 25% of their body weight while they keep to their den in winter. It is not until plants grow in the spring that bears begin to gain weight again.

Most people find it hard to estimate the size of a bear that they have seen in the wild. One good method is to pay attention to the relative size of their ears.

Because the ears of black bears reach full length when they are juveniles, small, skinny yearlings appear to have very long "Mickey-mouse" ears on slender faces, while large males seem to have very small, rounded ears on wide, round heads.

As the summer breeding season ends and the fall foraging begins, both sexes concentrate of foraging up to 18 hours a day. Normally, bears consume 5,000 calories a day, but in the fall, it jumps to 20,000 calories per day. Bears can gain up to 1-1/2 times their summer weight in the fall. The official term for this fall feeding frenzy is called "hyperphagia."

Male bears may stay active and search for food during the winter months. Typically, however, the foods they eat during the summer and fall should allow bears to survive the lean winter season.

What Does a Black Bear Eat?

Bears are called omnivores because they eat both plant and animals.  A Florida black bear's diet varies, but usually consists of 80% plants, 15% insects, and 5% animal matter.

The vegetative part of their diet is made up of grasses and leaves, as well as mast.  Hard mast is the fruit of forest trees like acorns, hickory and other nuts, while soft mast is fruits such as saw palmetto, holly, and pokeweed berries.

They also feed on colonial insects such as wasps, bees, termites, and ants.

The small meat portion of their diet is things that are dead (carrion) or play dead (e.g. armadillos, opossums) and are mostly obtained from scavenging.

FWC has compiled an extensive list of natural food items  that Florida bears are known to eat.

The black bear diet varies seasonally and yearly depending on fluctuations in plant productivity but it is also based on geographic variation from one region of Florida to the next. For example, saw palmetto berries are a high portion of bear diets in the Osceola population, but insignificant in the Apalachicola population where the berries are not readily available. For more information on each region's population, please see our distribution map.

During the summer months, bears eat about 5,000 calories a day or the equivalent of two large cheese pizzas.  But as fall begins bears start preparing for winter by going through a process of increased feeding called hyperphagia. Both sexes will forage up to 18 hours a day and gain up to 1½ times their summer weight.  This weight gain is because they are taking in up to 20,000 calories a day¹ or the equivalent of 8½ large cheese pizzas.  Another way to look at it is 20,000 calories is what the average person eats in 10 days! Gaining weight allows bears to make it through the leaner winter months, where both male and female bears will lose weight due to the lack of abundant food items. Once freezing temperatures set in bears will begin denning. Bears can lose up to 25% of their body weight while denning.

A bear is always looking for food, and is not very particular as to what foods they will eat. In addition, the bear can smell food up to a mile away. A bear's search for food is the primary cause of conflicts with people. Bears are often attracted to smells of garbage, beeyards, pet foods, barbeque grills, wildlife feeders, and other temptations bring them closer to human homes, which can result in property damage and safety concerns for both people and bears. Bears that habitually feed on human supplied foods such as garbage, wildlife feed, or pet food tend to be abnormally large.

It is important to know how to keep our Florida bears wild and away from your home. For more information, please visit Living With Bears.