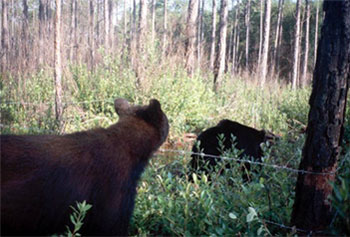 Bears are solitary by nature, except when in family groups of mothers and cubs or in pairs during the mating season.

Bears may congregate in areas of high food density, such as oak stands, berry patches, or farm fields. When abundant food sources are found across large areas, bears tend to tolerate each other more than usual, mostly because they cannot defend such a rich food source from competitors.

While bears may defend a food resource or mate while they are present, bears are not territorial. They do not patrol or defend a specific area from intrusion by other bears. Bears respect a certain personal space, but often several animals overlap each other's living space at different times. A bear's living space that provides food, water, and adequate cover is called a "home range."

The size of a home range may vary each season and year depending on food availability, the bear's sex or age, the reproductive status of the bear, and even the density of the area's bear population. During major droughts and famine, bears will range much further than normal to search for food. Bears are excellent swimmers and will frequent nearby islands during seasonal and climatic changes.

Bears have the ability to navigate homeward from unfamiliar areas, which often brings them across dangerous roads. Learn more at our bears and roads page.

Vision: Black bears are believed to see in color and have great up close eyesight. Recent research is showing that their long distance eyesight is not very good, they are likely not able to see details of a large objects from further than 30 yards away.

Hearing: They have acute hearing that is about twice as sensitive as humans and over a large frequency range as well.  Bears often hear humans before we see them. Because of this, black bears will often move away before they are noticed.

Smell: A bear's strongest sense is smell. They can pick up a scent from over a mile away! That is more than seven times better than a bloodhound. Bears, as a Family, are considered to have the best sense of smell of any land mammal. Their rumored poor vision may be due to their reliance on their sense of smell. 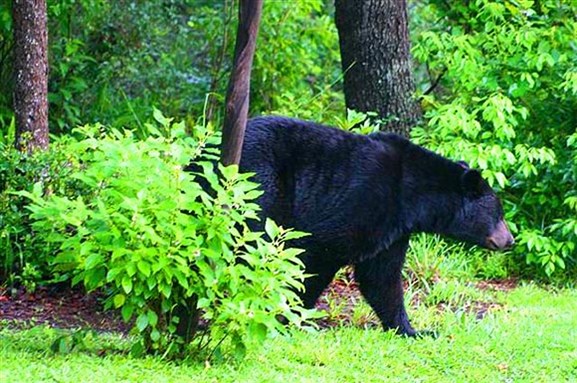 Bears respond to people as they would other bears. Understanding the various responses and ways bears communicate can help people to coexist with bears.

Bears are relatively quiet creatures, but will occasionally make sounds to communicate:

Black bear are curious animals. They often do a lot of sniffing, and may stand up on hind legs to get a better view and smell their surroundings. This is normal behavior and is not a sign of aggression. 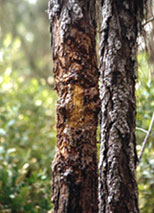 Some black bears rub, bite and claw marks onto trees between 5 and 7 feet high. Marks often occur along defined game trails, with the mark facing the trail. We are not sure why bears mark tress, but here are some of the theories to explain this behavior: