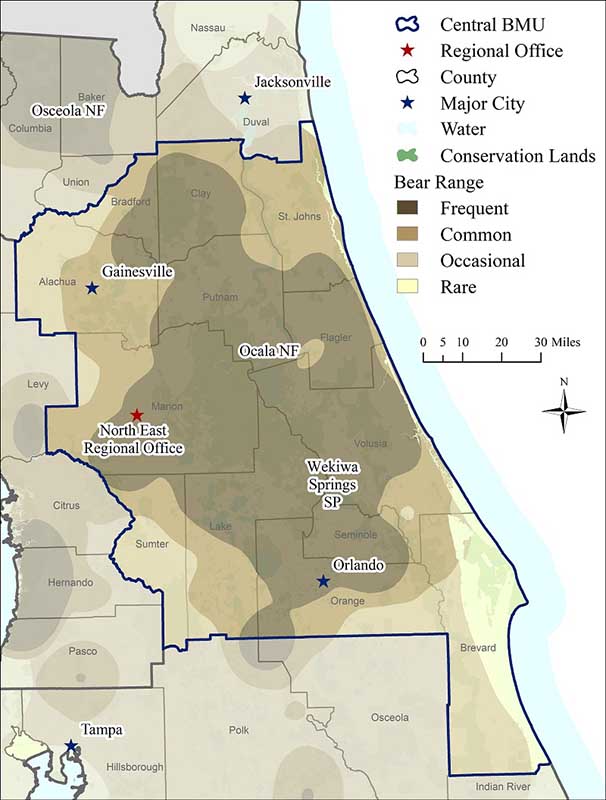 The Central Bear Management Unit includes Alachua, Bradford, Brevard, Clay, Flagler, Lake, Marion, Orange, Putnam, Seminole, St. Johns, Sumter, and Volusia counties and contains the Ocala/St. Johns subpopulation, named after the Ocala National Forest and St. Johns River watershed.  The Central BMU is one of three BMUs with a subpopulation estimated at over 1,000 bears, which is one of the criteria that determines a species’s risk for extinction. The plan’s objectives  for the Central BMU are to maintain at least 1,000 bears with the necessary habitat to support them, maintain forested connections with the North BMU and within the Central BMU, and to reduce human-bear conflicts, vehicle-related bear deaths, and habitat fragmentation. In 2002, the FWC estimated 825 to 1,225 bears lived in Ocala/St. Johns subpopulation. In 2014, the FWC estimated there to be an average of 1,200 bears in the Central BMU.

The Florida Black Bear Management Plan called for the creation of Bear Stakeholder Groups for each of the seven bear subpopulations. These groups are made up of local residents, government officials, non-profit organization staff, FWC staff, business owners, property managers, and other interested individuals in the Central BMU. The Group meets several times a year to discuss bear management and research.

Are you interested in being a part of the Bear Stakeholder Group? Email us at: BearPlan@MyFWC.com

This pie chart represents the reasons people call FWC about bears in the Central BMU.