The green sea turtle is a marine-dwelling species that can reach a length of 3.2 feet (98 centimeters) and a weight up to 400 pounds (181.4 kilograms) (Witherington et al. 2006). The name can be confusing as the green sea turtle carapace (top portion of the shell) is not actually green, the body fat is green. This turtle species has a black carapace and a white plastron (lower shell portion). The green sea turtle is distinguished from other sea turtles by its four pair of coastal (lateral) scutes and one pair of elongated prefrontal scales located between the eyes (NMFS and USFWS 1991).

Green turtles are named for the green-colored body fat attached to their lower shell, the key ingredient of once popular green turtle soup. Green turtles have a more streamlined look than bulky loggerheads. They have a small head for their body size, which averages about 300 pounds with a shell about 3.3 feet in length. Their upper shell is oval and olive-brown with dark streaks running through it and its lower shell is yellow. 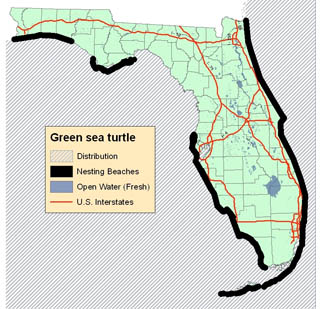 Green sea turtles can be found in subtropical and temperate oceans of the world (Witherington, 2006).

Florida hosts one of the largest grouping of green turtle nests in the western Atlantic. More than 37,000 green sea turtle nests were documented in Florida in 2015, a record number. During the day, green turtles occupy shallow flats and seagrass meadows. In the evening, they return to their sleeping quarters of rock ledges, oyster bars and coral reefs.

Adult green turtles have a mostly vegetarian diet of seagrasses and algae, unlike other sea turtles. They have been greatly impacted by human behavior. European settlers in the New World ate green turtle meat, eggs and fat. Once merchants discovered they could be kept alive by turning them on their backs in shaded areas, green turtles were shipped overseas. By 1878, the trade included 15,000 green turtles a year sent from Florida and the Caribbean to England, with Key West as a major processing center. Turtles were sometimes kept in water-filled pens known as "kraals" or corrals, and a few still exist today as tourist attractions.

During the breeding season, late spring and early summer, male sea turtles will migrate to off-shore waters to mate with females. Nesting seasons vary in the different geographical areas of their range; however, the Florida population nests between the months of June and September. Female green sea turtles come onshore at night to deposit eggs, a process that can take up to two hours to finish. The average clutch size is 110-115 eggs. Green sea turtles can nest up to seven times per season (NMFS and USFWS 1991). Once the female lays the eggs and buries them in the sand, she returns to the ocean leaving her young to safeguard theirselves. The incubation time for the eggs is two months. Hatchlings will migrate to the ocean after emerging from the nest. During migration, juveniles face an array of problems including predation and losing their way to the ocean. Sexual maturity is reached between the ages of 20 to 50 years old.

The green sea turtle faces many threats both on land and in the water. The main threat to green sea turtles at sea is entanglement in fishing gear such as longlines, monofilament fishing line, nets, and crab trap lines. When entangled in marine debris, the green sea turtle cannot escape and usually drowns. Green sea turtles are also harvested illegally in some countries for their meat and eggs. On land, increased beach development is an ongoing threat for sea turtles as development can cause degradation of the habitat, and limit the amount of nesting sites available. Coastal development also increases artificial lighting which can cause hatchlings to migrate towards the lights instead of the ocean. Other threats include increased predation on eggs, hits by watercraft, and habitat degradation from contaminants and pollutants (ex. oil spills).

Florida Statutes (F.A.C. Rule 68E-1) restrict the take, possession, disturbance, mutilation, destruction, selling, transference, molestation, and harassment of marine turtles, nests or eggs.  Protection is also afforded to marine turtle habitat.  A specific authorization from Commission staff is required to conduct scientific, conservation, or educational activities that directly involve marine turtles in or collected from Florida, their nests, hatchlings or parts thereof, regardless of applicant's possession of any federal permit.