It can be difficult for inexperienced people to tell the difference between an American crocodile and the other native crocodilian, the more common American alligator.  The following are some of the major differences between the two:

The common or spectacled caiman (Caiman crocodilus) looks more like the American crocodile than the American alligator. Its color is similar to the crocodile's but with a shorter more rounded snout. Caiman are found primarily in freshwater canals and lakes and rarely exceed 5 feet in length. 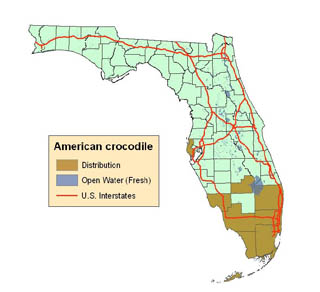 American crocodiles (Crocodylus acutus) are a shy and reclusive species. They live in coastal areas throughout the Caribbean, and occur at the northern end of their range in south Florida. They live in brackish or saltwater areas, and can be found in ponds, coves, and creeks in mangrove swamps. They are occasionally being encountered inland in freshwater areas of the SE Florida coast as a result of the extensive canal system.

The American crocodile inhabits brackish or saltwater areas and can be found in ponds, coves, and creeks in mangrove swamps.  American crocodiles occur in South Florida and also can be found in Hispaniola, Cuba, Jamaica, along the Caribbean coast from southern Mexico to Venezuela, and along the Pacific coast from Mexico to Peru. The northern end of the crocodile’s range is in South Florida.  Occasionally, crocodiles are encountered inland in freshwater areas along the southern Florida coast (Distribution map data from: Krysko et al. 2011). 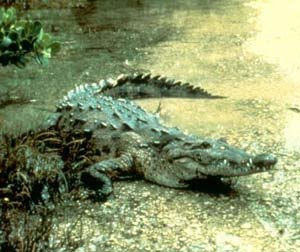 A basking crocodile may be surprised by an approaching person and quickly (and noisily) enter the water. This behavior might startle the person, but it should not be misunderstood. Crocodiles would normally enter the water quietly; splashing away indicates that the crocodile is frightened.

Crocodiles can also be seen sunning with their mouths open, or "gaping." This behavior is also related to regulating their body temperature, and does not mean that the crocodile is acting aggressively toward people.

Male crocodiles begin courting females in late January and early February.  Crocodiles are ectothermic and therefore control their body temperature by basking in the sun, or moving to areas with warmer or cooler air or water temperatures.  Courting rituals can be extensive, often lasting for days.  Males initiate courting by quickly and consecutively performing head slaps, and the female will raise her snout and arch her tail if she is interested.  The last courting ritual involves the male and female rubbing snouts and submerging under water.  Nesting occurs in late April and early May.  The soil nests are built on land and above high tide marks.  Females will lay 20 to 60 eggs that incubate for about 85 days.  When the incubation period is complete, females will dig the nest up and carry the young to water (Mazzotti, n.d.).

Historically crocodiles were hunted extensively as their hides were worth a considerable amount of money between 1930 and 1960.  This caused considerable damage to their population rates.  Presently, illegal hunting and habitat destruction are the main threats to the crocodile population (Florida Museum of Natural History, n.d.).  Habitat destruction occurs in different ways, but the main threat has been humans developing in crocodile habitat.  It is illegal to hunt crocodiles in the U.S.; however, some hunting still occurs illegally.  Hunting also occurs in other countries in the crocodile’s range, as most countries have hard times enforcing conservation laws, or have no conservation laws to protect the crocodile and its habitat.  Hydrological alterations in their habitats can cause damage to their eggs as they cannot withstand conditions that are too dry or too wet (Florida Museum of Natural History, n.d.).  Crocodile nests also face threats of predation from raccoons, birds, and crabs (Mazzotti, n.d).  Other threats include vehicle strikes, disease, and mortality and habitat damage from hurricanes (Florida Natural Areas Inventory 2001).