The red wolf is a mid-sized member of the Family Canidae.  This species reaches a height of 26 inches (66 centimeters), a length of four feet (1.2 meters), and a weight of 80 pounds (36 kilograms).  Red wolves are mainly yellowish-brown with some black on their back, and reddish fur on their legs, neck, and behind their ears (U.S. Fish & Wildlife Service 2011).  Some recent genetic research suggests that the red wolf may be a hybrid of the gray wolf and coyote.

The red wolf is a social species that lives in packs.  However, they do not hunt in packs.

Breeding occurs between the months of January and March (NatureServe 2011).  Dens are located in stream banks, sand knolls, and hollow trees (National Parks Conservation Association, n.d.).  Gestation for the red wolf is 60-63 days with an average of 3-12 young born per litter from March to May.  The red wolf reaches sexual maturity at three years of age (NatureServe 2011).

The life span of the red wolf is 7-8 years in the wild and up to 15 years in captivity. 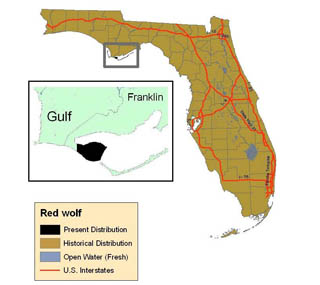 The red wolf inhabits coastal prairies, forests, and swamps (National Parks Conservation Association n.d.).  Historically they were present from Texas, east to Florida, and north to Pennsylvania in mountains, lowland forests, and wetlands.  Presently, the only wild population is a reintroduced population in northeastern North Carolina; although, a breeding pair was reintroduced to St. Vincent Island, Florida also.

Historically, the red wolf was trapped and killed almost to extinction by humans to protect livestock and game (Mulheisen and Csomos 2001).  When settlers first arrived to the New World, they brought an extreme fear that wolves were associated with the Devil.  Bounties were issued for wolves due to the fear of the species.  These fears, plus the protection of livestock, and the destruction of habitat caused the extinction of the red wolf subspecies Canis rufus floridanus in 1920 (U.S. Fish & Wildlife Service 1989).  In 1973, a captive breeding program was started for the red wolf by the U.S. Fish & Wildlife Service.  This program was needed due to the fact that the species’ population had been severely decimated and was on the brink of extinction.  Out of the 17 red wolves captured for breeding, 14 were the pioneers of the successful breeding program.  In 1980, the U.S. Fish & Wildlife Service listed the red wolf as extinct in the wild.  In 1987, red wolves were reintroduced at Alligator River National Wildlife Refuge in North Carolina.  Today over 200 red wolves are a part of the captive breeding program in the U.S. (U.S. Fish & Wildlife Service 2011).  Hybridization (mating between two different species) with coyotes threatens the red wolf population as it decreases the number of genetically distinct individuals.  When the red wolf population became severely decimated, coyotes began to occupy their niche (job or function in an ecosystem) and continue to presently. 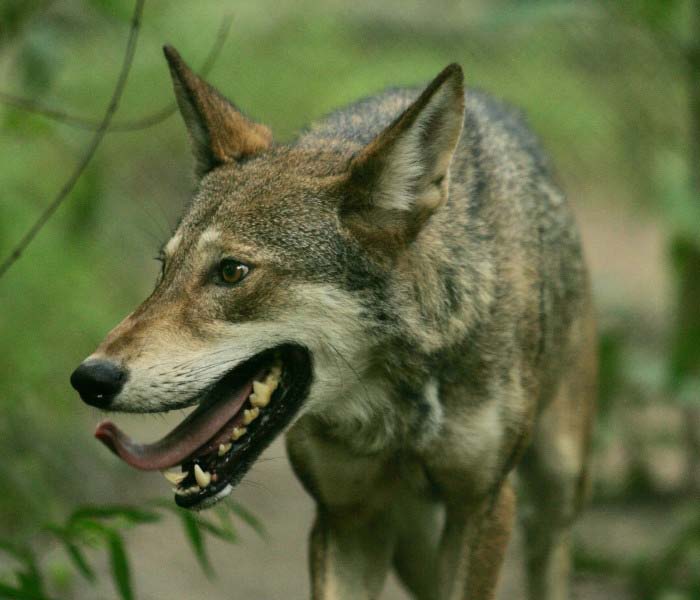