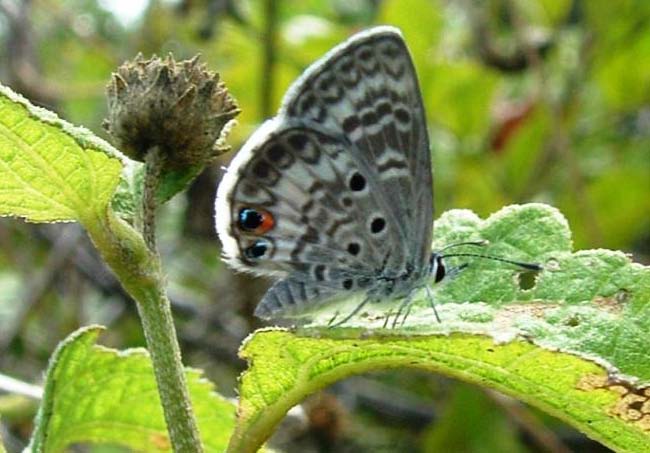 The Miami blue butterfly is a small butterfly that has forewing length of 0.4-0.5 inches (1-1.3 centimeters).  Both sexes are bright blue on the back with a gray underside.  Males have narrow black margins, while females have a wide black margin and an orange eyespot near the hindwing outer angle.  On the underside of the hindwing, the Miami blue has four black basal spots, and a wide white submarginal band on both the hindwing and forewing (Daniels 2006).

Miami blue populations are capable of producing multiple generations each year between the months of February and November.  Their eggs are laid on the flowers, flower buds, and terminal growth of its host plants.  The larvae of Miami blue butterflies have a slug-like shape and are mainly green with a black head capsule, red to brown mid-dorsal line, and white lateral lines.  Up to seventeen ant species have been found to tend to larvae, and may protect them from predators and parasitoids (like a parasite but it ultimately kills or consumes the host).  The Miami blue’s dark brown to black pupae develops into adults in 30 days (Zhong et al. 2009). 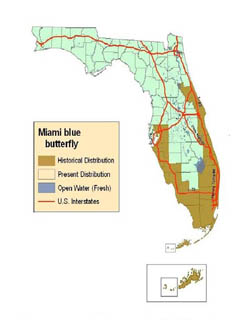 The Miami blue butterfly inhabits tropical hardwood hammocks, tropical pine rocklands, and beachside scrub in Florida (Daniels 2006).  It was historically known from coastal mainland Florida as far north as Hillsborough County on the Gulf and Volusia County on the Atlantic, but disappeared from the mainland by the 1980s.  The Miami blue was thought extinct until it was rediscovered in 1999 in Bahia Honda State Park in the Lower Florida Keys (Daniels 2006).  Although subject to significant fluctuations, the Bahia Honda population persisted until 2010, when it disappeared, perhaps due to a combination of drought, cold temperatures, and predation by non-native green iguanas.   Fortunately, additional populations of Miami blues had been discovered in Key West National Wildlife Refuge in 2006, and these are the focus of current surveys and conservation action.

The State Management Plan for the Miami blue lists four present threats: (1) habitat loss and degradation; (2) habitat fragmentation and group isolation; (3) mortality; and (4) invasive species.  Some or all of these threats may have played a role in reducing the species’ original range to its very small present range.  However, it is not clear what caused the Miami blue to disappear from large conservation lands that it formerly occupied, including Everglades and Biscayne National Parks.  Although pesticide use has been suggested as a threat, it would not explain the Miami blue’s apparent loss from the fauna of national parks which were not sprayed (Zhong et al. 2009).  Due to its small range and geographical area, the species would seem to be especially vulnerable to extinction from hurricanes.