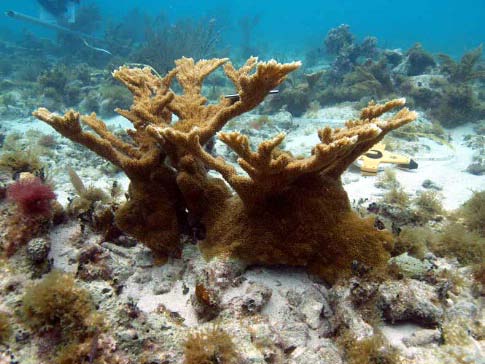 Elkhorn coral received its common name due to its resemblance to elk antlers.  The elkhorn coral’s complex large and thick green colored branches can reach a length of 6.5 feet (two meters).  Upper growth is determined by wave forces, while the lower growth is determined by the availability of light and the quantity of suspended sediments (National Oceanic & Atmospheric Administration n.d.).

Elkhorn coral harbors symbiotic (depends on the host as the host depends on it to survive) zooxanthellae [autotrophic (creates own food through photosynthesis) dinoflagellates] which photosynthesize and provide energy in the form of carbon compounds (amino acids, glucose, etc.) to the colony.  They also feed on zooplankton (National Oceanic & Atmospheric Administration, n.d.).

Elkhorn coral primarily reproduces asexually; however, they are capable of producing sexually.  During asexual reproduction, or asexual fragmentation, branches of coral break off and attach to the ocean floor.  Sexual reproduction occurs only once per year in August or September.  Elkhorn coral spawn by releasing eggs and sperm into the water for fertilization.  Larvae will live in plankton for several days until they locate a proper habitat to settle in and metamorphose.  Observations from recent years have supported that larvae rarely survive to metamorphose and develop colonies (National Oceanic & Atmospheric Administration, n.d.). 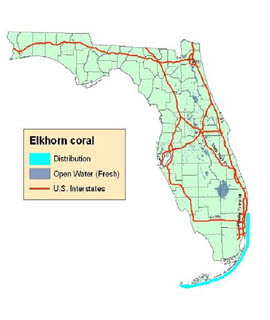 As global climate change continues to affect the Earth, all coral faces the threat of bleaching, sea level rise, and ocean acidification.  Bleaching occurs when the surrounding waters, or the coral’s habitat, is degraded enough to the point where their symbiotic zooxanthellae (dinoflagellate) are expelled by the host, thereby causing loss of pigmentation to the colony.  Global climate change causes an increase in the temperature of marine waters which is detrimental to the coral.  Ocean acidification, also a byproduct of global climate change, can impair coral skeleton calcification rates and erode existing reefs.  Hurricanes pose a threat as their intense storm conditions can cause damage to the coral through changing wave action.  Elkhorn coral face the threat of disease including the white plague disease and white pox disease (National Park Service, n.d.).  The white plague disease is a disease where tissue is destroyed by the marine bacteria, Aurantimonas coralicida.  White pox disease is a disease where tissue is destroyed by the marine bacterium, Serratioa marcescens.  White pox disease was first discovered in 1996, with 82% of the population dying off four years after being discovered (National Park Service, n.d.).  Also, sedimentation threatens the elkhorn coral’s marine habitat, as the increased sediment prevents light from reaching the lower portion of the coral preventing lower growth.  Other threats include extreme variations of water temperature and salinity, and physical colony damage caused by anchors and boats.