The little blue heron is a small wading bird species that can reach a length of up to 29 inches (74 centimeters), with a wingspan of 41 inches (104 centimeters) and a weight of 14 ounces (397 grams).  Little blue herons have a grayish-blue body and a dark red head during breeding, and a purplish head and neck during non-breeding periods (Rodgers et al. 1995).

The little blue heron nests in colonies, often with other species of long-legged waders.  Nests of sticks are placed in trees and shrubs on islands, thickets near water, or emergent vegetation over water.  Little blue herons will lay three to five blue-green eggs that hatch in 20 to 24 days.  The young are able to leave the nest and fly (fledge) at 28 days of age. 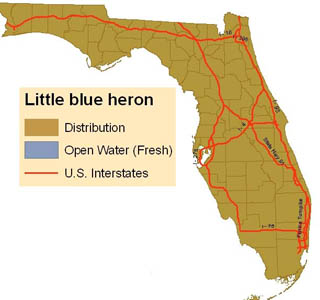 The current threats to the little blue heron are not well understood.  Threats may include coastal development, disturbance at foraging and breeding sites, environmental issues, degradation of feeding habitat, reduced prey availability, and predators.  Other threats may include exposure to pesticides, toxins, and infection by parasites (Rodgers et al. 1995).

The little blue heron is protected by the U.S. Migratory Bird Treaty Act and as a State Threatened species by Florida’s Endangered and Threatened Species Rule.