The Cape Sable seaside sparrow is a secretive bird that is usually heard before they are seen.  This species can reach a body length of five inches (12.7 centimeters) with a wingspan of 5.1-7.9 inches (18-20 centimeters) (The Cornell Lab of Ornithology, n.d.).  This seaside sparrow has a dark olive-gray colored back, a light gray side with dark olive streaks, and small patches of yellow feathers in front of their eyes and at the bend of their wings.

Nesting occurs from February to August, with most nesting activity happening from April to May.  The length and timing of nesting depends on flooding, as nesting will be delayed or terminated if flood waters become too high.  Cape Sable seaside sparrows build their nests in clumps of grass that are around six inches (15.2 centimeters) off of the ground.  Females lay between three to four eggs per clutch, with two to three nests attempted every year.  The rate of nesting success is 40-75%.  Eggs are incubated by the female for 12 days.  Fledging occurs at 9-11 days olds. 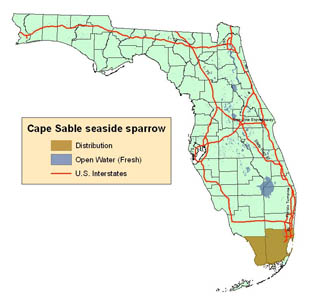 Historically, habitat destruction and conversion to agricultural land has been the major threat to the species (U.S. Fish & Wildlife Service 2003).  Presently the degradation of habitat is a considerable threat to the Cape Sable seaside sparrow population (Florida Natural Areas Inventory 2001).  Improper water regimes in the Everglades can cause delays and even the termination of nesting.  Three or more years of low breeding rates can cause critical declines in the Cape Sable seaside sparrow’s population, as its lifespan is only around four years.  Encroachment of hardwoods and the removal of dead plants can reduce the suitability of the habitat for breeding.  Prescribed fire is the usual method to prevent this; however, fire can kill adults, their young, and eggs (National Park Service, n.d.).  The population of the Cape Sable seaside sparrow is restricted to South Florida, which makes the species vulnerable to natural catastrophes.  South Florida is vulnerable to direct hits from hurricanes, which could significantly reduce the species’ population.

The Cornell Lab of Ornithology. (n.d.). Seaside Sparrow. Retrieved July 6, 2011, from All About Birds: http://www.allaboutbirds.org/guide/Seaside_Sparrow/lifehistory