Its color is often gray-brown and it has a long, dark bill and long, rounded tail. 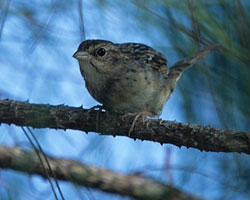 With native breeding habitat once extending from Florida to Ohio and Illinois, the Bachman's sparrow shows a range-wide decline of almost three percent per year from 1966 through 2001 (Breeding Bird Survey). This demise is mostly due to the conversion of open longleaf pine forests to dense pine monocultures, and the exclusion of fire. The birds are more abundant in Florida than perhaps any other state.

The Bachman's sparrow prefers open longleaf forests with a groundcover of grasses or forbs, but with little or no understory of trees or shrubs. These forests are best maintained with the use of frequent prescribed fires. Occasionally, the sparrows will use overgrown agricultural fields, pastures and clearcuts as long as they remain relatively open, and especially if they are adjacent to open longleaf forests.

Spring and summer is the best time to listen for the elusive five-inch Bachman's sparrow. Their song begins with a loud, clear whistle followed by an extended trill.

In the spring, pregnant females scrape out a shallow depression on the ground and then construct a domed grass nest in a dense shrub or palmetto clump. Three to five glossy white eggs are laid, the young usually hatching in late spring or early summer. After 10 days, the young leave the nest.

They feed on a variety of insects and other invertebrates. Generally, pinewoods management designed to benefit the red-cockaded woodpecker also benefits the Bachman's sparrow.