The whooping crane is the tallest bird in North America, standing nearly five feet (1.5 meters) tall with a wing span of seven to eight feet (2.1-2.4 meters).  Adult males typically weigh around 16 pounds (7.3 kilograms) while females weigh around 14 pounds (6.4 kilograms).  Adult whooping cranes are solid white with a red crown on their head, long black legs, and a long “S” shaped neck.  Whooping crane chicks have a cinnamon brown body color; however, by the age of four months they will begin to gain adult-like white feathers.  (Picture at right - juvenile whooping crane)

Initially, chicks are the color of cinnamon brown. By four months of age the chicks have emerging white, adult-like feathers that produce a mottled appearance. Young whooping cranes achieve adult-looking plumage as they approach one year of age. 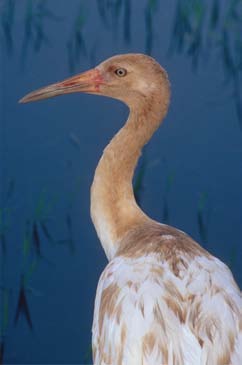 While courting, males will perform a dancing ritual that includes them jumping, flapping their wings, and tossing objects into the air (The Cornell Lab of Ornithology 2011).  The nesting season in Wood Buffalo National Park (located in Alberta and the Northwest Territories of Canada) occurs between the months of April and May, while cranes in Florida breed between the months of January and May.  The clutch size for the whooping crane ranges from one to three eggs (M. Folk pers comm. 2011).  Eggs are incubated for 29-31 days with both parents sharing the incubating duties.  Breeding pairs will re-nest if the first clutch of eggs is destroyed before mid-incubation.  It is rare for more than one of the chicks from a single nest to survive.  Whooping crane chicks are able to fly (fledge) at 80 to 90 days old.  Juvenile migratory cranes become independent from their parents on their first migration north, while non-migratory whooping cranes become independent before their parents’ next breeding season.  Whooping cranes mate for life, but will pick new partners if the previous partner is lost.  Females produce their first fertile eggs at four to seven years of age. 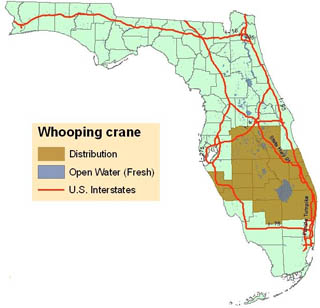 Whooping cranes have a very limited range and only inhabit shallow marshes and open grasslands.  The only natural whooping crane nesting population is located in Wood Buffalo National Park.  This population winters in and around Aransas National Wildlife Refuge, which is located on the Texas Gulf Coast.  There is a non-migratory population in Central Florida that the FWC introduced in 1993.  The introduction was stopped in 2008 due to survival and reproduction problems.  During the winter, migratory whooping cranes are led by an ultra-light aircraft from Wisconsin to Florida.  A new project to reintroduce non-migratory whooping cranes to Louisiana was begun in early 2011 (Louisiana Department of Wildlife and Fisheries 2011). 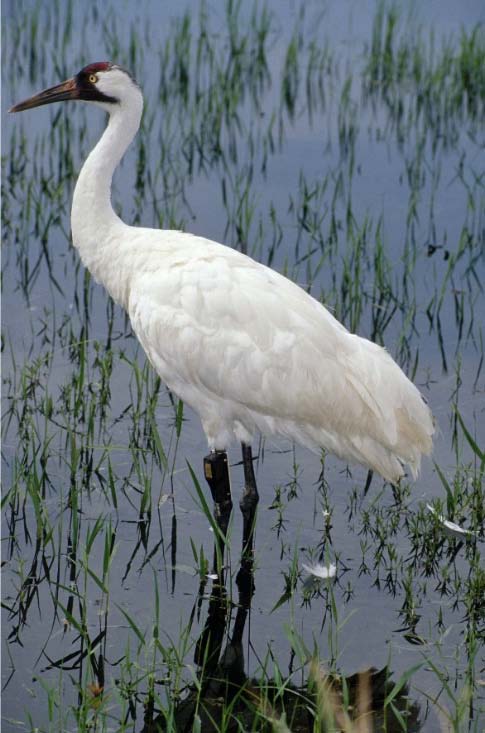 The main threat to the whooping crane is the alteration and degradation of their habitat in the Aransas National Wildlife Refuge.  The wetland zones are eroded and degraded due to construction and use of the Gulf Intracoastal Waterway.  Pollution is also a threat to the whooping crane in Aransas, as the boats and barges in the Intracoastal Waterway carry toxic chemicals that could cause devastating effects to the species if spilled.  Their extremely small range also puts them at risk to suffer a population decline during natural disaster events.  Other threats include illegal hunting, collisions with cars, and increased predation by other species such as the black bear, wolverine, gray wolf, red fox, lynx, and bald eagle (Lewis 1995).  Also, in recent times, wind farms and their associated power lines in the migratory corridor have become a major concern (Canadian Wildlife Service and U.S. Fish & Wildlife Service 2007).

The Cornell Lab of Ornithology. (2011). Whooping Crane. Retrieved May 20, 2011, from All About Birds: http://www.allaboutbirds.org/guide/Whooping_Crane/id