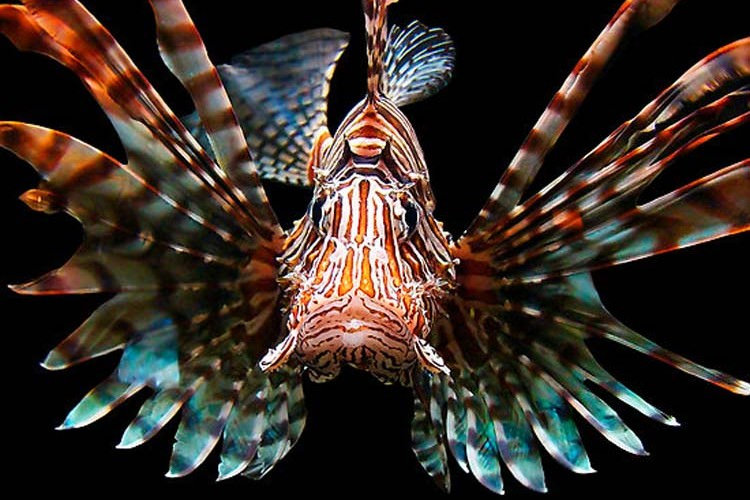 Lionfish are an invasive species that have a potential negative impact on native species and habitat. The Florida Fish and Wildlife Conservation Commission (FWC) encourages people to remove lionfish from Florida waters to help limit negative impacts to native marine life and ecosystems. 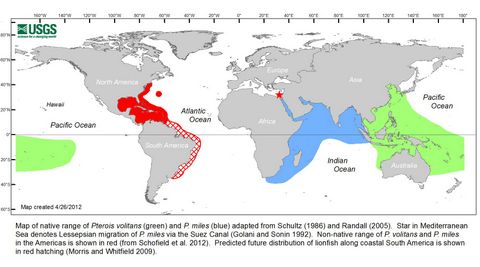 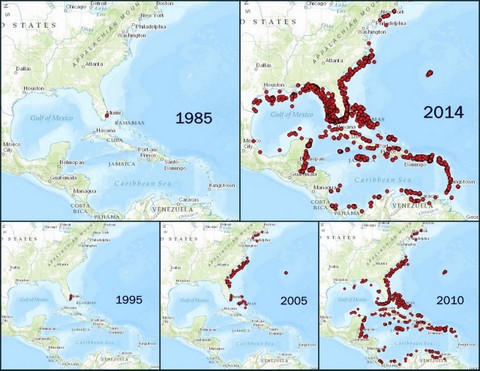 Lionfish were first reported off Florida's Atlantic Coast near Dania Beach in 1985.

We do not know for sure how the first release into our waters occurred. We do know a release from ballast water was not likely the culprit.

In the 2000s, the species began to be recorded off the Atlantic coasts of North Carolina, South Carolina and Georgia, while reports from Bermuda and Florida continued.

Since the mid-2000s, lionfish reports have increased rapidly. As of 2010, they have even begun to show up in areas where lionfish previously were not found such as along the northern Gulf of Mexico off Pensacola and Apalachicola.

Movement of lionfish likely followed currents up the Atlantic Coast, around to the Bahamas and then into the Gulf.

Lionfish are a predatory reef fish. They eat native fish, which can reduce native populations and have negative effects on the overall reef habitat and health as they can eliminate species that serve important ecological roles such as fish that keep algae in check on the reefs. Lionfish also compete for food with native predatory fish such as grouper and snapper. 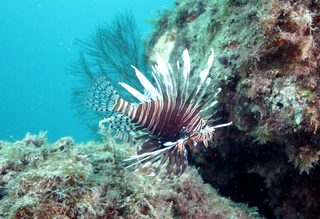 Lionfish are a marine species that are primarily red, brown and white andhas a striped, zebra-like appearance. While there are two distinct but visually identical species found in their non-native range, about 97 percent are red lionfish.

They grow to about 12-15 inches in length; however they have been noted to be larger in areas where they are not indigenous, exceeding 18 inches.

Lionfish can reach maturity in less than a year, but growth slows as they get bigger. Males mature at about 4 inches, females at about 7 inches.

Lionfish have a unique way of spawning. Females release two gelatinous egg masses of about 12,000 to 15,000 eggs each. These masses float and can drift for about 25 days. Lionfish can spawn every four days in warmer climates.

Each bony and venomous spine is grooved and covered with a skin-like tissue. During a sting, the skin-like covering is torn and retracted as the spine is inserted into the body of a predator. This process allows direct exposure of the wound to the venomous glandular tissue located along the grooved spine. Lionfish fins are not hollow and do not inject venom like a hypodermic needle or the fangs of a snake.

The flesh of the lionfish is not poisonous or venomous.

Lionfish also have very bony cheeks, but venom is not located there.

Lionfish are stalking predators that often corral prey into a corner. They can consume prey that are more than half of their own length and are known to prey on more than 70 marine fish and invertebrate species including yellowtail snapper, Nassau grouper, parrotfish, banded coral shrimp, and cleaner species. They also compete for food with native predatory fish such as grouper and snapper and may negatively impact the overall reef habitat by eliminating organisms that serve important ecological roles such as herbivorous fish that keep alga in-check. Adult lionfish spread their pectoral fins and use them to "herd" prey. They are the only species known to blow water at prey in an effort to get prey to turn toward the lionfish before being devoured.

Lionfish have high fidelity to a location, meaning once they find suitable habitat as an adult they tend to stay there, and can reach densities of more than 200 adults per acre.