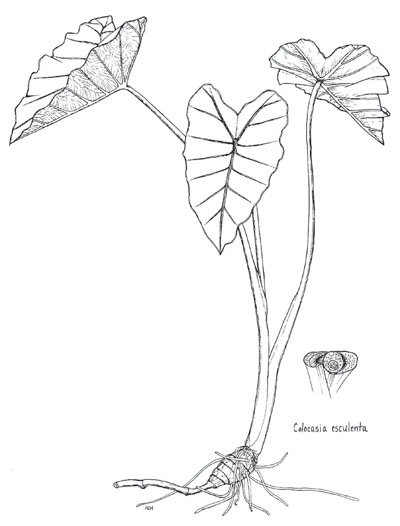 Wild taro has spread to various shorelines throughout Florida and is considered an agricultural weed in Puerto Rico and Jamaica. It is dispersed primarily by purposeful or accidental movement of vegetative fragments.

Fruits: Fruit a small berry, in clusters on the fleshy stalk.

This native of India and southeastern Asia was brought from Africa to the Americas as a food crop for slaves. By 1910, it was introduced into Florida and other southeastern states by the U.S. Department of Agriculture as a possible substitute crop for potatoes.

Now found escaped throughout the tropics and much of the subtropics, including Florida.

Wild taro may be confused with other plants in Florida that have large arrowhead-shaped leaf blades, such as the nonnative elephant ear (Xanthosoma sagittifolium) and the native arums (Peltandra spp.). Only taro has leaf stalks attached to the back of the leaf blade.

Why wild taro must be managed

Wild taro tubers contain oxalic acid crystals, giving it an acrid taste and causing irritation unless prepared properly. The plant must be handled with care, for all parts contain the irritant.