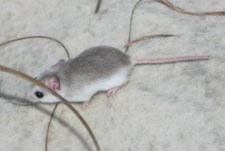 Description
The beach mouse is brown along the back and white underneath with large ears and dark eyes. Average weight is approximately 12.5 grams (0.45 ounces); average length, including the tail, is approximately 10 centimeters (4 inches).

Behavior
Beach mice are monogamous and usually mate for life.  Reproduction peaks in the winter but continues year-round if food is available. Gestation is approximately 23 days, and females have an average of four pups per litter.  In the wild, mice typically live from nine months to one year.

Habitat
Beach mice occupy the narrow dune ecosystem across the island. They depend completely on dunes found only in scrub and coastal strand habitat, particularly dunes with open sand and sparse vegetation.  Home range size varies among subspecies and individual mice, but averages about 0.5 hectares (approximately 1.25 acres). Individual home ranges can overlap.  The mice are nocturnal, so they forage at night and spend the daytime in their burrows. Within their home range, beach mice often maintain 20 or more burrows where they sleep, nest, feed, and store seeds.

Diet
Beach mice primarily feed on the fruits and seeds of dune plants such as sea oats, sea rocket, and bluestem. They occasionally eat insects.