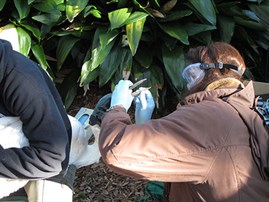 Managing or mitigating wildlife diseases is also an important responsibility for FWC veterinarians. As with domestic animal diseases, prevention is far more effective than treatment, and this is especially true for free-ranging wildlife populations as once a disease has been introduced there is often little that can be done to eliminate it. Regulations and outreach/education are important tools for preventing wildlife diseases.  Vaccination as a preventive measure is rarely used in wildlife populations but can be useful in some endangered species.

Two important regulations designed to prevent the introduction of CWD include the prohibition on importation of live cervids and on the transport of hunter-killed carcasses from CWD-positive states. Press releases, notices in hunting regulations, and other outreach programs are also used to help prevent the inadvertent movement of CWD-infected deer into Florida. Vaccinating Florida panthers against feline leukemia virus (FeLV) may have helped end an FeLV outbreak in 2004 (Cunningham et al., 2008). Continued FeLV vaccination of live-captured panthers is designed to help stop the chain of transmission if the disease spills over into the panther population. In 2016, FWC and US Fish and Wildlife Service (USFWS) veterinarians assisted with the outbreak of New World Screwworm in Key deer in the Florida Keys. Veterinarians performed humane euthanasia as well as capture, immobilization and treatment of infested deer.

Technical Assistance
FWC free-ranging wildlife veterinarians conduct forensic necropsies, provide wildlife immobilization and anesthesia, and occasionally surgically implant radio telemetry transmitters. Veterinarians also address wildlife animal welfare issues including proper methods for humane euthanasia as well as establishing agency protocols for capture, immobilization and other management or research activities. Although wildlife rehabilitation is not a large focus of Florida’s Wildlife Health program or other government wildlife agencies, in cases of endangered species such as the Florida panther, rehabilitation of injured or orphaned panthers and release back into the wild can serve as a management tool to help recover the population.

The Wildlife Health team also conducts applied research on wildlife diseases in Florida. Some examples of ongoing research include the epidemiology of duck virus enteritis and demodectic mange in Florida black bears.