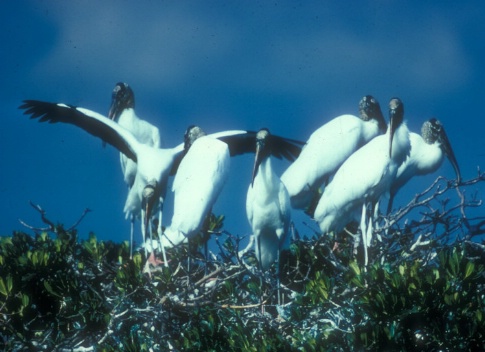 The wood stork is a large, long-legged wading bird that is a member of the stork family (Ciconiidae). It is distantly related to herons, egrets, and ibises (Order: Ciconiiformes). However, recent genetic studies suggest storks are more closely related to the new world vultures (Family: Carthartidae). The wood stork is our only native stork that occurs in the United States. Wood storks also are found in Central America and South America.

Wood storks are about 35-45 inches in length with a wing span of about 60-65 inches. The plumage is white except for iridescent or glimmering black feathers along the entire wing and tail. The head and upper neck of adult storks do not have feathers, but are covered with a rough, scaly skin that is gray-colored. The legs and bill are a black tone but the toes have a pink hue. Unlike herons, storks fly and soar with the neck and legs extended. Whereas nestling storks utter a variety of calls and sounds, adult storks are nearly voiceless and make only hissing sounds. However, the stork will produce a loud sound by snapping their bills during courtship or aggressive behaviors.

Wood storks are highly social in their nesting habits, often nesting in large colonies of 100-500 nests. Historically, there were reports of stork colonies estimated to be as large as 1,200-5,000 nests in the Big Cypress and Everglades of south Florida. Wood storks feed mostly on fish, in water between 2-15 inches in depth, where the water is calm and uncluttered by aquatic vegetation. Storks have a very specialized tactile foraging behavior whereby they move their partially-opened bill through the water in a side-to-side motion, often using their feet to rake or scare up aquatic prey. Once the bill detects a fish, the bill is snapped shut in one of the quickest reflex reactions among animals. Locating prey using tactile location allows storks to forage in muddy water but requires a relatively high prey density to be effective. Thus, storks tend to forage in wetlands that have long annual wet periods followed by drying conditions to concentrate prey during the spring and early summer months for successful breeding seasons.

Historically, wood storks were a common species throughout the southeastern United States. However, precipitous declines in stork range and populations occurred during the first half of the 1900s because of the stork's specialized foraging attribute and the loss of wetlands used for foraging, especially in south Florida. Ultimately, the United States population was listed as endangered by the U.S. Fish and Wildlife Service in 1984 and by the Florida Fish and Wildlife Conservation Commission (FWC) in 1988. While the number of stork nests and colonies in Georgia and South Carolina appeared to increase during the 1980s and 1990s, storks still experience continued nesting related problems in Florida, especially south Florida. Recently, storks have established a colony in North Carolina.

The success of wood stork fledging, or the process in which a bird grows to be independent of its parents, often is variable among different years and colonies suggesting food resources are the likely factor in differences in nestling survivorship and fledging rates. Based on statewide surveys conducted by FWC personnel, stork colonies increased from 32 colonies during 1976-78 to 52 colonies during 1986-87, but decreased to 34 colonies in 1999. The most recent survey indicated about 7,216 nesting pairs in Florida during 2005.