Whooping cranes occurred naturally in the eastern United States until the mid-twentieth century, and there are records of whooping cranes in Florida until the 1930s. The Florida Fish and Wildlife Conservation Commission's Fish and Wildlife Research Institute (FWRI) is currently involved in two multi-agency projects to restore the whooping crane to its former range. Efforts by FWRI biologists focus specifically on areas in the southeast, mainly in Florida.

This project was originally designed to introduce a flock of non-migratory whooping cranes to Florida. From 1993 to 2004, biologists released 289 captive-raised whooping cranes into central Florida. Due to problems with survival, reproduction, and other challenges, a decision was made to stop releasing cranes into the non-migratory flock. However, studies of the surviving members of this flock will continue in order to provide more knowledge about the challenges they are facing. For more information on the changes to this project view the news release on these changes.

FWRI is also involved in a project to restore migratory whooping cranes to the eastern United States. Each winter since 2001, whooping cranes have been led by ultra-light aircraft from Wisconsin to Florida. Once these birds are taught the migration route from north to south, they will make the journey on their own. To learn more about the migratory project, visit http://www.bringbackthecranes.org/. 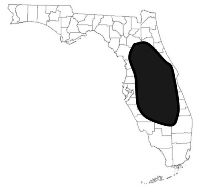 Currently, there is only one self-sustaining flock of whooping cranes in North America that migrate annually. This flock breeds in Canada and winters along the gulf coast of Texas.