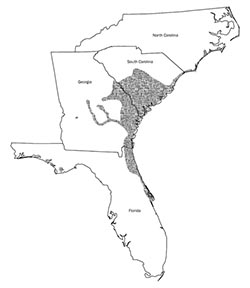 The male painted bunting (Passerina ciris) is one of the most brightly colored songbirds in North America. The French name for the species, nonpareil (without equal), refers to its distinctive purple, blue, red, yellow and green plumage. Males attain adult plumage when two years old. Females are a yellowish green and resemble subadult males. The male’s song is a variable high-pitched warble.

Painted buntings occur in two geographically distinct breeding populations: a western population that ranges from northwest Florida to Texas, including Oklahoma and parts of Mexico; and an eastern population limited to coastal areas from North Carolina to northern Florida, and inland along large rivers. Two subspecies are recognized based on geographic distribution, migration patterns and timing of molt (shedding of feathers). Painted buntings in Franklin, Gulf, Bay and Wakulla counties of the Florida Panhandle may be an expansion of the western subspecies or an overlap of occurrence. Genetic studies are needed to determine the range of the two subspecies, or if they are so dissimilar that two separate species should be designated. The breeding range of the eastern subspecies in Florida extends along the northeast coast from the state line south to Cape Canaveral and inland along the St. Johns River. Eastern painted buntings winter in south Florida, Cuba, Jamaica and the Bahamas. Florida is the only state with a breeding and wintering population.

Coastal scrub plant communities and edges of coastal oak hammocks are the preferred breeding habitats in Florida; however, the subspecies may also use roadside thickets, uncultivated fields, abandoned citrus groves and some urban areas. Painted buntings build nests in shrubs or small trees, usually within 6 feet (approximately 2 meters) above the ground.

The breeding season in Florida is May through mid-July. Territorial males are very aggressive toward other males of their species. Lengthy combative encounters on the ground and in the air can result in lost feathers, eye damage and death. Male painted buntings perform an elaborate courtship display on the ground, hopping around the female with spread wings and a flattened tail. Females build nests of grass and leaves, often locating them in a clump of Spanish moss. The female incubates up to four white eggs with reddish brown speckling for approximately 10 days. Once the eggs hatch, she cares for young in the nest for an additional 12-14 days. Painted buntings can make two or three nesting attempts during a breeding season in Florida. The species is mostly monogamous, but polygyny, the habit of having two or more mates, has been reported.

Breeding Bird Survey and Christmas Bird Count data indicate a significant population decline for eastern and western painted buntings over the past 43 years. More recent trend estimates (1999-2009) indicate a slower decline or stabilization at a lower population level. However, with painted buntings reported from only four of 92 Breeding Bird Survey routes in Florida, data are considered imprecise for statewide trend estimates. Although causes of the rangewide decline are unknown, the narrow geographic range of the eastern population makes it vulnerable to habitat loss and fragmentation, and local extinction. Even moderate coastal development can reduce populations by 50 percent. In degraded habitat, increased nest loss from predation and nest parasitism, caused when brown headed cowbirds lay and abandon eggs in painted bunting nests, may negatively impact some populations. Painted buntings are illegally trapped and sold as caged birds, which  may also contribute to the decline. A U.S. Geological Survey investigation found that this black market trade appears to be widespread in southeast Florida, with adult male painted buntings selling for $55 and subadult males and females selling for $35.

Several organizations have recognized the vulnerability of the eastern painted bunting. The U.S. Fish and Wildlife Service lists it as a Bird of Conservation Concern; the National Audubon Society includes it as a WatchList species; and Partners in Flight, a cooperative partnership organization, classifies it as a Species of Continental Importance. In addition, the FWC gave the species a high ranking when prioritizing avian information needs to guide future research.

Because of the perceived population decline, the Eastern Painted Bunting Working Group organized an extensive three-year study to estimate population size and understand habitat use throughout the range of the subspecies. Information about the study can be found at the Eastern Painted Bunting Population Assessment and Monitoring Project website. FWC biologists conducted the Florida component of this cooperative rangewide project from 2009 to 2011. Researchers established and monitored stations where they conducted point count surveys to estimate painted bunting abundance and determine habitat use in Florida during the breeding season.

The study revealed a much larger population than anticipated – four times the size of previous estimates. Researchers found a higher abundance of painted buntings in coastal oak hammocks and scrub, and lower numbers in pine plantations. Study results may not necessarily represent a population increase, but instead may reflect a better assessment than could be attained from previous methods such as the Breeding Bird Survey. Recent population estimates provide encouraging news about the status of the eastern painted bunting. Because of their restricted distribution, continued conservation efforts are necessary to provide suitable habitat for painted buntings and other vulnerable coastal species.

Researchers at the University of North Carolina are conducting a study to determine the survival and movement patterns of painted buntings. As the birds readily visit bird feeders, researchers recruit volunteers to observe these devices and report sightings of banded (color-marked) birds. A painted bunting banded in North Carolina has been wintering at a backyard bird feeder in Stuart, Florida for several years. The observations of this bird and others provide important information on migration patterns and winter range. To learn more about the project or become a member of the Painted Bunting Observer Team, visit www.paintedbuntings.org.