Advice to Searchers and Birdwatchers 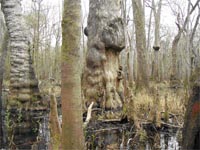 Where should we start to search for Ivory-billed Woodpeckers in Florida, given that the state has more than 1,700 streams and rivers with a combined length of about 10,600 miles?

Within these areas, the two primary habitat types that should be explored are cypress-tupelo swamp and bottomland hardwood forest.  Cypress-tupelo swamps (Image A) are forests that are flooded for prolonged periods and composed mostly of cypress (Taxodium spp.) and tupelo (Nyssa spp.).  These swamps are often found in oxbows, or land between extreme bends of a stream, and sloughs, or marshy, muddy areas, of the larger rivers. 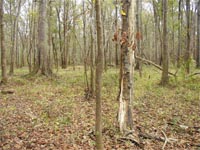 Bottomland hardwood forests (Image B) are composed mostly of a diverse mixture of hardwood trees. This mixture of tree species varies with topography, but some of the species found in the wetter areas are water hickory, green ash, and overcup oak.  These forests, found along larger rivers, are flooded annually, but for a shorter period than the cypress-tupelo community.

Please be aware that the woodlands near the rivers in which Ivory-billed Woodpeckers may still occur are frequented by venomous snakes, most notably cottonmouths (also known as water moccasins), pygmy rattlesnakes, and occasionally coral snakes, diamondback rattlesnakes, and copperheads. Therefore, while searching for Ivory-billed Woodpeckers, please be aware at all times of where you are stepping or placing your hands. Protective clothing such as hiking boots and snake chaps are highly recommended to avoid bites on the ankles.

Please determine the location of, and emergency phone number to, the nearest hospital before searching.  In the event of a venomous snakebite, proceed directly to the nearest hospital. Do not try to kill the snake, as this may increase your chances of being bitten by the snake again. It is also illegal to kill a snake on state-owned lands.  Please learn to identify these snakes. Color photos of venomous snakes in Florida, and further recommendations on avoiding venomous snakebites, may be found at http://www.flmnh.ufl.edu/herpetology/fl-guide/Venomsnk.htm.