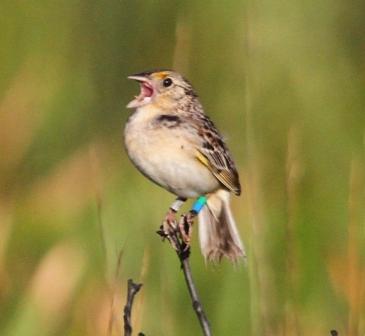 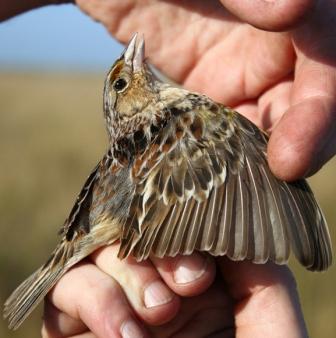 Often unnoticed or overlooked because of their small size and cryptic habits, grasshopper sparrows are usually heard before they are seen. Their primary song consists of two or three quiet introductory notes followed by an insect-like "buzz." A less frequent secondary song is a sustained rambling warble. The warble song is more likely to be sung by paired males later in the breeding season. The Florida grasshopper sparrow has darker plumage with more gray tones* than the Eastern grasshopper sparrow which has more buff-colored plumage. Identification of the subspecies can only be confirmed in the hand, and even then, they can be challenging to tell apart during seasons of range overlap. 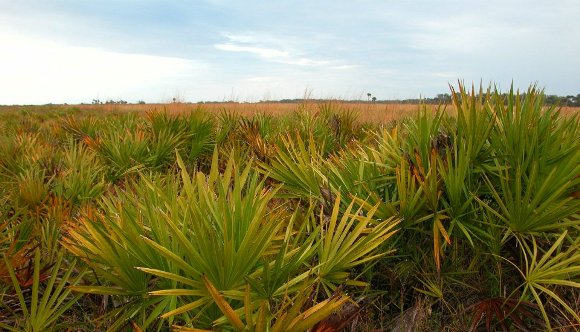 Habitat
The Florida grasshopper sparrow requires large treeless grasslands dominated by bunch grasses, low shrubs, and saw palmetto with enough interspersed bare ground for this ground-dwelling sparrow to forage effectively. This habitat is dependent on frequent burning, and the sparrows prefer prairies which have been burned within the previous two years. The prairie was historically maintained by frequent wildfires which were ignited by lightning, or prescribed fires set by cattle ranchers.

Reproductive Biology
From late March to July, male Florida grasshopper sparrows sing from perches on shrubs and grasses to maintain their breeding territories. Males often use the same territories over consecutive years. Females build the nests which are domed structures made of grass, making them very difficult to find. They are usually located in a slight depression in the ground, well-concealed by clumps of dwarf live oak, wire grass or saw palmetto. Nest site selection appears to be influenced by the availability of small clumps of dense vegetation for protection within more open areas needed for foraging and predator distraction displays.

The female incubates three to five eggs for 11-12 days. Grasshopper sparrow eggs are creamy white with red-brown flecks on the large end. The young grasshopper sparrows stay in the nest for about eight days after hatching. When they leave the nest, the fledglings remain on the natal territory for a few weeks and continue to be fed by their parents.* There are many threats to nests and young sparrows. Potential nest predators include: snakes, birds of prey, crows, rodents, raccoons, skunks, armadillos, opossums, coyotes, fire ants and even box turtles. Nests may also fail because of flooding, particularly in the late summer. Like many ground-nesting birds, the probability of nest success is very low for individual nests. Breeding pairs may nest several times after failure. However, if few successful nests are produced in a given season, it can have dramatic results on population decline. 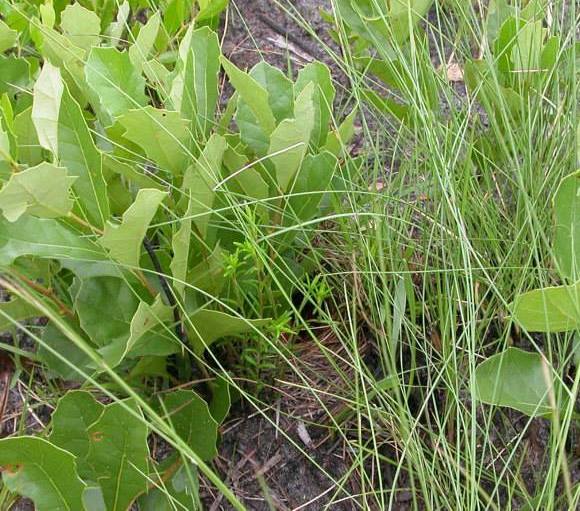 The Florida subspecies was first described in 1902 by U.S. Army surgeon, Major Edgar A. Mearns from specimens collected 10 miles south of Lake Kissimmee in Osceola County. Reports from the early 1900s suggest a relatively large, widespread population in south-central Florida. However, a decline in the number of sparrows the 1970s coincided with the conversion of prairie grasslands to improve cattle pastures, sod production and other agricultural uses. Only about 19 percent of the original dry prairie remains in Florida.

A status survey completed by the Florida Fish and Wildlife Conservation Commission (FWC) in 1985 found 182 Florida grasshopper sparrows at only two previously known locations and seven new sites. Because of its restricted distribution, loss of habitat, and population decline, the Florida grasshopper sparrow was state listed as endangered in 1977 and federally listed as endangered in 1986. Despite its listed status, continued habitat loss has nearly wiped out known breeding populations on private land.

Surveys in 2004 found only seven occupied locations, with a total estimated population of about 1,000 individuals. Surveys in 2012 indicated the lowest number of males ever detected on public lands: 75 singing males on three properties. Most Florida grasshopper sparrows are located on public lands at Three Lakes Wildlife Management Area (Osceola County), and Kissimmee Prairie Preserve State Park (Okeechobee County). Although once considered the strongest population, the birds at Avon Park Air Force Range (Highlands and Polk counties) dramatically reduced and may be functionally extirpated. The sparrow could be reclassified as threatened if at least 50 breeding pairs become established at each of 10 locations within its former range, or removed from endangered status if 25 such sites are established. 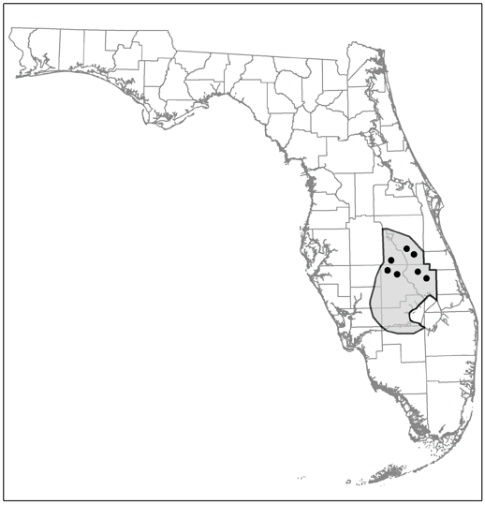 Conservation Efforts
The future management and restoration of prairie grasslands will have important consequences for the recovery of the Florida grasshopper sparrow. Fortunately, the sparrow appears to respond to habitat restoration. Increased densities and nesting success occurs on prairies within one year after a burn. Public land managers maintain dry prairie habitat for Florida grasshopper sparrows with prescribed fire and expand potential habitat by removing encroaching trees. Annual point count surveys are conducted for all populations on public lands to monitor trends and evaluate recovery efforts. Genetic analysis of blood samples collected from the remaining sparrows found that they were closely related, indicating some movement among populations. Florida grasshopper sparrows did not show a low level of genetic variability characteristic of small populations unlikely to recover. A population viability analysis concluded that the subspecies has a 22 percent chance of falling below an extinction threshold of 60 males within the next 50 years.