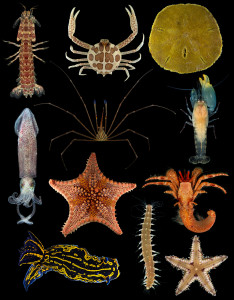 On a research vessel in Gulf of Mexico, deep into the night, Fish and Wildlife Research Institute (FWRI) seafarers communicate in Latin, “Doryteuthis!campechanus! synagris! brevirostris!” Scientists call out species’ names as they sort trawls of writhing fish, toxic sponges, and everything in between. The effort is part of the Southeast Area Monitoring and Assessment Program, or SEAMAP—an operation to collect data for future policy and management decisions of marine resources in the region. All species encountered in the biannual cruises are accounted for (hence the Latin). And there are a lot of them.

The Gulf of Mexico harbors roughly 9,000 species of invertebrates alone. Yet this number only represents those that have been discovered and described by scientists; there are many, many more. Think worms buried deep in soft sediment, symbiotic shrimp living in the network of tunnels in barrel sponges, the sponges themselves that form the structure of whole communities, and numerous other obscure and cryptic species of sea cucumbers, slugs, squirts, and beyond. Life in the ocean is diverse, it is complex and connected, and there is much left to be discovered.

FWRI’s marine collection (or Specimen Information Systems) is teaming with SEAMAP and other FWRI programs to not only discover, document, and describe marine biodiversity, but also make these data available to scientists and the public—worldwide, free and open. The goal is to census all species in the region and provide photos, keys, descriptions, and DNA sequence data to help identify each one. A huge task, but it’s worth it. All marine biology research—from identifying game fish prey items to rehabilitation of damaged ecosystems—hinges on first knowing what’s out there. The accompanying photo of specimens collected on a recent SEAMAP cruise represents the beginning of this initiative and just a small taste of the Gulf’s incredible biodiversity.