A Partnership with National Parks Service 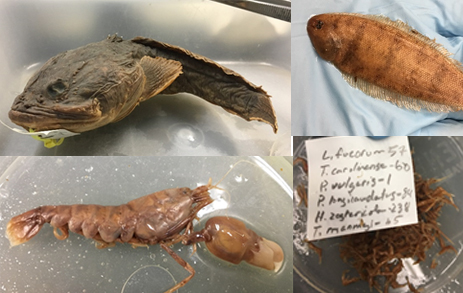 The Robblee Collection is a group of specimens resulting from a series of projects conducted between 1983-2011. The goals were to quantify abundance and species composition of seagrass-associated fish and invertebrates in relation to salinity and habitat. The three projects are: The Pink Shrimp Project from 1983-2007, the Monitoring and Assessment Plan (MAP)/Fish and Invertebrates Network (FIAN) from 2005-2011, and Long-term Biscayne Bay (LTBB) from 2002-2007.

Over time these projects captured community responses to changes in salinity, episodes of hypersalinity, and habitat losses accompanied by seagrass die-off in Florida Bay. The studies were also able to track the subsequent shift of Florida Bay from a clear water system to a system characterized by turbid water and algal blooms.

National Park Service (NPS) has tasked FWRI with inventory of the Robblee Collection. Inventory includes, but is not limited to: specimen handling, inventory, cataloging, identification, preservation, rehousing, and quality assessment.

Specimen Information Services Curator, Dr. Paul Larson and the Invertebrate Collection Manager, Laura Wiggins are responsible for managing the collection while in the possession of The Fish and Wildlife Research Institute (FWRI), however day to day maintenance is performed by Haley Holloway and Jessica Hamilton. Jessica and Haley began as volunteers for FWRI and were hired as part-time Other Personal Services (OPS) employees for the Robblee collection in May of 2017. Jessica Hamilton began as a volunteer for FWRI in February of 2016 and is currently an undergraduate student at the University of South Florida St. Petersburg. Haley Holloway began volunteering in January of 2017 and graduated from the University of South Florida St. Petersburg with a Bachelor of Science in Biology with a concentration in Marine Science.

There are a total of 216 buckets containing the Robblee Collection and specimen inventory began in May of 2017. As of May of 2018, 61 buckets have been completed with the assistance of interns and volunteers.