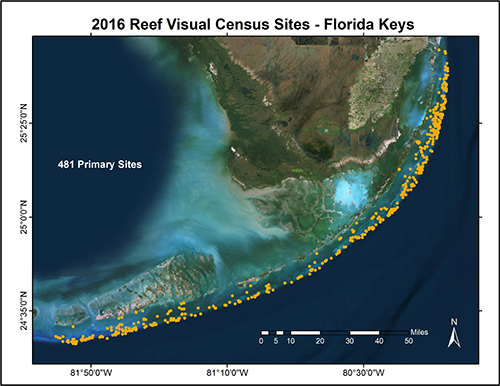 Reef fish communities are a vital component of coral reef ecosystems and have major economic and ecological importance throughout the world. Increasing stressors such as overfishing, coastal development, and coral degradation makes it more important than ever to have a long term monitoring program. In 1998, the Florida Fish and Wildlife Conservation Commission (FWC) Fisheries Independent Monitoring (FIM) program started a long-term monitoring program of key reef fish species throughout the Florida Keys National Marine Sanctuary. In 2008, researchers with the Florida Fish and Wildlife Conservation Commission’s Fish and Wildlife Research Institute (FWRI) joined efforts with other agencies to perform cooperative monitoring of reef fish communities in the FL Keys coral reef ecosystem. From this collaboration, the multi-agency Reef Fish Visual Census monitoring program was developed. Other agencies involved with the monitoring include the National Oceanic and Atmospheric Administration (NOAA)’s Southeast Fisheries Science Center, the National Park Service (NPS), the University of Miami-Rosenstiel School of Marine and Atmospheric Science (RSMAS), and Nova Southeastern University (NOVA). 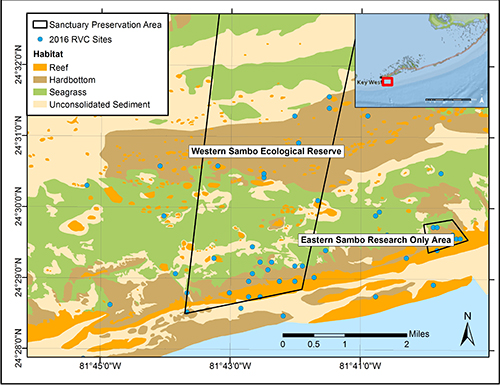 The FWC-FWRI has been conducting visual census surveys since 1998, but adopted the RVC methodology in 2008. The RVC monitoring program was conducted annually until 2014, when it changed to biennial sampling on even-numbered years. Since the start of the multi-agency collaboration in 2008, over 11,000 diver surveys have been conducted in the Florida Keys region 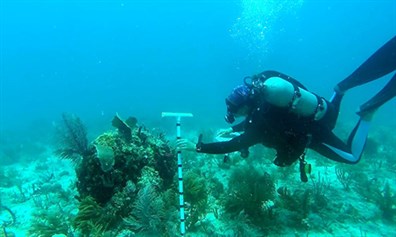 Two buddy-pairs of highly trained underwater fish observers conduct stationary point counts of all reef fish species within a 15 m diameter cylinder for a total of four fish surveys per sampling location. Once divers complete the fish survey, they will then conduct a habitat survey within their 15 m diameter cylinder. The habitat survey collects information on benthic cover, reef rugosity, and habitat type in addition to the environmental conditions such as water temperature, visibility, and depth. Surveys are generally conducted between the month of April and September and are conducted at depths up to 100’. Each RVC season, around 400 different sites are visited which amounts to 1600 individual diver surveys. Over 400,000 fish are counted each year, representing over 250 different species.

As of 2014, a subset of sites are selected for a more extensive coral demographic survey to compliment the RVC survey.

Watch an animated video of the RVC methods. 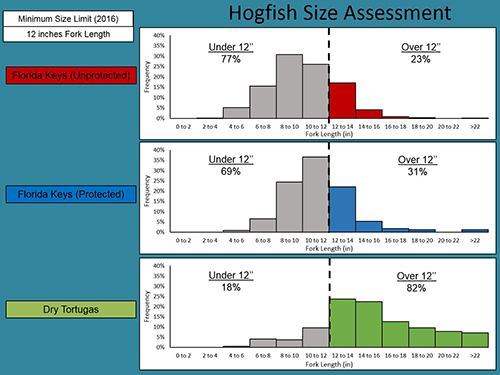 How this data is used:

Analysis of length distribution data of hogfish during the Reef Visual Census surveys in 2014 show both juvenile and adult fish sizes among populations in protected and unprotected areas of the Florida Keys and in the Dry Tortugas. Data like this can help inform managers when species are undergoing fishing regulation changes.

The Reef Visual Census program has developed a long-term database for reef fish species that has proven valuable in interpreting fisheries dependent data and developing regulations for protecting reef fish resources in the Florida Keys. Restrictions on capture and minimum sizes of most commercially important species makes it difficult to monitor life history parameters and abundance data from samples collected from the fishery. The reef fish visual census program is the only existing long term program that monitors reef fish length frequency, abundance, and life history based on fishery-independent data for the reef fish community as a whole. These data provide critical input for the state and federal agencies in the assessments of stock status and assist decision makers in the management of reef fish species in South Florida.