Historically, bay scallops occurred in Florida from West Palm Beach on the Atlantic coast to Pensacola in the state’s northwest corner. In recent decades, however, their range has decreased considerably. Although bay scallops were once plentiful along the west coast of Florida, they have disappeared in some areas. Today, Florida’s bay scallops occur in isolated populations scattered along its west coast, and the majority are found in nearshore seagrass beds from Tarpon Springs in Pinellas County to Port St. Joe in Gulf County.

Scallops are sensitive to changing environmental conditions such as seagrass losses, increases in fresh water and loosening of sediments. Extreme changes can result in local population collapses. Over time, reductions in Florida’s bay scallop population resulted in the smaller, localized populations biologists monitor today. Each year, a local population must produce enough offspring to replenish itself or receive offspring from neighboring populations to remain stable. Because Florida bay scallops typically only live one year, local populations are more susceptible to periodic collapses. 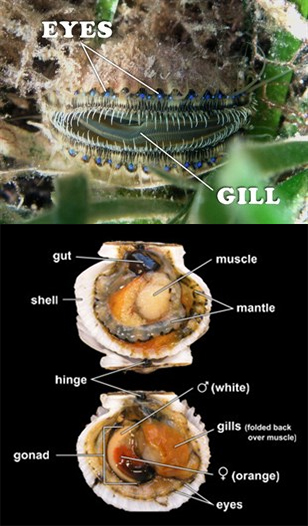 The bay scallop is a member of phylum Mollusca in the class Bivalvia. Bivalves have two valves, or shells, joined by a hinge. The bay scallop's upper shell is a dark, mottled color and its lower shell is typically white. Occasionally, both shells are bright yellow or orange, but these individuals are rare. Bay scallops can reach a shell height of 90 millimeters (3.5 inches) and live up to two years. In Florida, however, bay scallops rarely grow larger than 75 millimeters (3 inches) or live longer than one year.

Bay scallops have many tiny, blue eyes lining the outer rim of the shells to help detect movement and serve as a warning system. When threatened, a bay scallop can swim backwards by contracting and relaxing its large adductor muscle to open and close its shells. This thrusts out water and propels the scallop up off the bottom and away from danger. 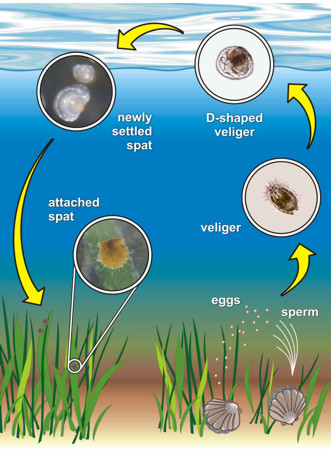 A bay scallop has the remarkable ability to develop female and male sexual organs and, thus, produces both eggs and sperm. In the final stages of development, scallops use all their energy for reproduction. This leaves little energy for movement, making the scallop vulnerable to predation. This may be why many do not survive to spawn a second time.

Rapid changes in water temperature generally trigger bay scallops to spawn. In Florida, most spawning occurs in the fall when the temperature drops. A single scallop is capable of producing millions of eggs at once, but only one egg out of 12 million is likely to reach adulthood.

It takes approximately 36 hours for fertilized eggs to become tiny larvae, known as veligers. Larval scallops are pelagic, meaning they drift in the water column, for 10 to 14 days. During that time, they may be carried a considerable distance from where they were spawned. While drifting, larvae develop into juvenile scallops, commonly called spat. They eventually settle out of the water column and attach to seagrass blades using thin, silky fibers called byssal threads. Approximately 90 percent of spat will die within six weeks of settlement. Those that survive eventually detach from the seagrass and fall to the bottom, where they remain for the rest of their lives.